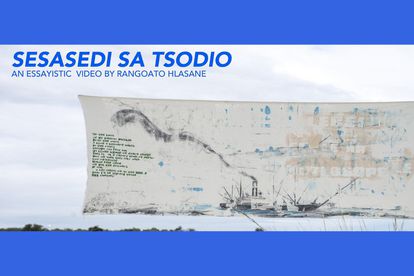 Before harepa artist Johannes Mokgwadi recorded the song Tsodio Le Khwembu from his 1974 album – telling the story of a fugitive on the run with an accomplice after the murder of his uncle – Tsodio was an obscure tale travelling through Sepedi orature.

Mokgwadi could not have known it then, but by transforming a parable of human fallacy into song, he was enacting a tradition that would open it to further reinterpretation.

Over time the tale of Tsodio would come to be a way of expressing distress about social issues.

Artist Paulina Mphoka who performs Kiba le Dinaka, Sepedi traditional dance music, was the first of many to broaden the tale of Tsodio and place it in the social context of her time.

Mphoka’s version, Mosadi Wa Sepankana, marks a critical turn. By infusing it with the fugitive state of self-employed beer-selling women, it became a song considering the plight of Black women in the face of power.

For cultural worker and co-founder of Keleketla! Library, Rangoato Hlasane, whose essayistic film Sesasedi sa Tsodio attempts to locate and interrogate the meaning of the tale, Mphoka’s version is the most important in the trajectory of the song.

“Lebo Mathosa is the first woman to popularise the tale of Tsodio, but it was Paulina Mphoka who stripped it of its patriarchal connotations and expanded its social context to include women,” says Hlasane.

In 1998, a decade after Mphoka expanded Tsodio’s context, legendary Xitsonga singer Joe Shirimani recorded Marabastad, an album that carried its own rendition of the folktale.

Shirimani’s version marked another turn, with the tale taking on a more pop feel and losing much of its traditional sound.

The generation with which Shirimani’s Tsodio resonated had largely new priorities. These were men and women reeling from years spent as migrant workers in the country’s economic hubs only to face mass entrenchments as the effects of Thabo Mbeki’s accelerated neoliberal policies began to show at the dawn of the new millennium.

But it wasn’t until kwaito star Lebo Mathosa recorded her 2000 debut solo project Intro-EP that the Tsodio folktale lost its conservative interpretation and became a mainstream phenomenon.

“My research about the tale of Tsodio is born out of my interest in Lebo Mathosa as a subject. She is essentially the person who exposed it to a wider audience,” Hlasane says.

Mathosa encountered the folktale as a teenager when she went to live with her grandmother who loved the story.

It is what Mathosa’s grandmother says about the tale (“we are all Tsodio”) that fuels Hlasane’s curiosity about its multiple contexts or what he describes as the tale’s “umbilical cords”.

“I was fascinated by what she meant when she said we are all Tsodio, and I think it’s about Blackness as something fugitive or the notion of Blackness as this restless thing, but I’m also fascinated by its endurance and how the tale continues to attract people from different genres like amapiano,” says Hlasane.

Though Mathosa’s take on the tale of Tsodio is not specific to any sociopolitical issue (she leaves it to the listener) the restlessness that imbues her song could be read as an expression of the disappointment of a born-free generation beginning to reckon with the limitations of their freedom.

Some of those limitations are brilliantly captured in Teboho Mahlatsi and Angus Gibson’s controversial SABC drama series Yizo Yizo.

Despite democratic freedom, public schools largely remained under-resourced, the quality of healthcare in many communities was regressing and the state had failed to adequately respond to the HIV/Aids epidemic.

In the early 2000s, news of horrific homophobic attacks and murders regularly made headlines. It was also around this time that Mathosa came out as bisexual.

In a more recent context, Hlasane explains that the restlessness of Tsodio can also represent the fear of women besieged by gender-based violence in the country.

Narrated by Masello Motana with videography by Bhekisisa Pilot Biller and music scored by trombonist Siya Makuzeni and Azah Mphago, Sesasedi Sa Tsodio is an attempt to explore the multiple contexts that have become attached to the tale of Tsodio.

To musician Vusi Mahlasela, who features in the film, Tsodio’s restlessness represents African youth’s fear of farm labour – especially in the then Transvaal where, in the 1950s, potato farms were notorious for exploitation.

That fear is relevant today where exploitation of children is still prevalent on farms.

“It’s a film that raises more questions than it answers, but it’s also a film that points to our other ways of being as a people, our histories,” says Hlasane.

The film is set against the backdrop of three places that have and continue to contribute significantly to South Africa’s incessant hunger for migrant labour: Meadowlands, Mamelodi and Mahikeng.

It speculates that because of their shared history of migrant labour and force removal, these are the places that Tsodio was most likely to run. To honour this trajectory, Hlasane has been screening the film in all three.

To Hlasane, these areas are more than just sites of conquests.

“It’s about issues of language and for me these three places are where the advancement of our language has been most intense,” he says.

By this, Hlasane is thinking about what the youth of Mahikeng did in using motswako to assert and expand Setswana as a language in which to express themselves.

To make his point, he features rapper Motlapele “Molemi” Morule who brings to the film his famous “blue collar dreams” verse.

There is, of course, precedent between Sepedi cultural music and motswako – Edgar Makgaledise (DJ Lemonka) borrows sonically and visually from Kiba le Dinaka for his sophomore album Motswako Tape II.

Sesasedi Sa Tsodio is part of Hlasane’s PhD thesis at the University of the Witwatersrand, which explores kwaito visual culture.

Borrowing from Anjalika Sagar and Kodwo Eshun’s London-based The Otolith Group – which creates research-driven films and performances – Hlasane is not oblivious to the limitations of his chosen medium.

“Essayistic films aren’t for everyone, but I like that because it’s really an attempt to grapple with a subject. It makes room for failure. There are no foregone conclusions.

I see myself more as a writer than a filmmaker and sharing the film is part of a writing process. As we screen the film and have these conversations, my thesis is being written,” he says.

An important part of Hlasane’s work is that the communities around which the film is centred are part of the process. Each screening is followed by an engagement with the audience.

By sharing the film with these people, Hlasane is partly addressing the concern that institutions of higher learning are often extracting knowledge from communities without giving them recognition.

Because a big part of what Hlasane is trying to do is to recognise African oral histories and honour kwaito as a legitimate archive of that history, it became important to address what he laments as the poor state of archiving in the country by documenting the process.

THE COMPLEX LEGACIES OF KWAITO

In their book Born to Kwaito, Sihle Mthembu and Esinako Ndabeni argue that we have not even begun to scratch the surface of the complex legacies of kwaito.

Hlasane’s film can be read as a response to this – it is ultimately about the unfinished business of the genre and how to honour its legacies, particularly its intellectual legacy.

It may have been born in the precarity of urban migrant life but some of kwaito’s most important songs were sonic interventions influenced by the complexity of African culture.

And that it continues to enjoy a resurgence as an academic subject speaks to how just much of its legacy we are yet to uncover.