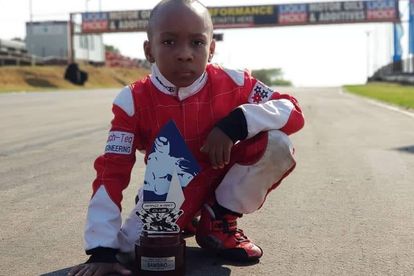 Tshepang Shisinwana is a Pretoria-based go-karting racer who has taken the local karting world by storm. In celebration of Youth Day, the 11-year-old Bambino champion spoke to The South African about his achievements as a young racer and his plans for the future. Tshepang also let us in on a few secrets about how he prepares for race days and where his inspiration for racing came from.

TSHEPANG SHISINWANA’S LOVE FOR THE TRACK

When he was five years old, Tshepang’s father bought him a racing kart, but he was sceptical about hopping in and taking it for a spin.

“As soon as I could drive myself around the track, I fell in love with racing,” said Tshepang.

The passionate racer has also raced at different tracks across the country and race days are always a family affair.

HOW DOES TSHEPANG PREPARE FOR RACE DAY?

Race day for Tshepang takes a whole lot of preparation and hard work. The young racer, who forms part of the Squadra Corse Racing Academy, practices with his team the day before a race.

“I sleep early the night before the race and my mom always tells me to eat healthily. I wake up at 05:00 and prepare my racing bag which has all my racing equipment. Gloves neck brace and lots of water,” he explains.

“He started racing when he was young and he never gave up. He has won seven World Championships because he practices hard and doesn’t give up.”

WHAT’S NEXT FOR THIS YOUNG RACER?

As a young racer, Tshepang says the sport has taught him to be patient and keep trying, even if he doesn’t do well the first time around.

Of his future plans, the young racer says: “I am in the Mini Rok Championship and working hard to be one of the front runners.”

“My best position has been fifth for this year and I am working hard to come first.”