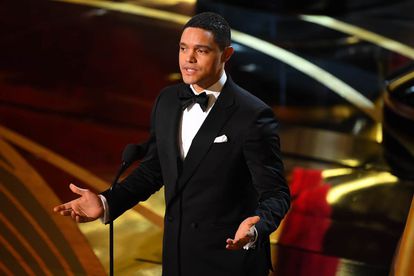 Trevor Noah during the 91st Academy Awards at the Dolby Theatre in 2019. Photo: USA TODAY/Robert Deutsch

Trevor Noah during the 91st Academy Awards at the Dolby Theatre in 2019. Photo: USA TODAY/Robert Deutsch

Trevor Noah isn’t the kind of guy who forgets his roots in a hurry. So when the Soweto-born superstar received his first-ever Grammy Awards nomination this week, the momentous occasion wasn’t lost on him.

Trevor Noah nominated for a Grammy

Trevor is up for Best Comedy Album for his Son of Patricia comedy special. In the special, The Daily Show host touches on tacos, runaway snakes, camping, and lessons he learned from his mother. The Grammys will take place on 26 January at the Staples Center in Los Angeles.

He didn’t just name his wildly-successful special after his mother, he’s also lavished her with praise during a stellar year, which has seen Trevor Noah nominated for two more Emmy Awards. He already has the gong for Best Short Form Variety Series – an accolade he snapped-up in 2017.

How Trevor Noah reacted to the news

The comedian took to social media on Thursday morning to express his gratitude. As well as paying tribute to Patricia herself, Noah also gave a nod to the comedy legends also nominated in his field:

“Today I woke up to the news that I’ve been nominated for a Grammy award. A GRAMMY AWARD! … What a life I’ve been blessed enough to live. Thank you, mom. Just when I thought the feeling couldn’t get any better I saw the other names in my category and I almost cried.”

“Dave Chappelle: my mentor and friend. A legend who pushes me to be funnier every time I’m on stage. Ellen DeGeneres: my watch buddy and talk show/stand up idol. Aziz Ansari: My comedy cellar comrade. Where we would work our ideas every night. Jim Gaffigan: A comedy genius who has made me cry laughing every time I’ve watched him on stage and every time we’ve hung out off stage!”