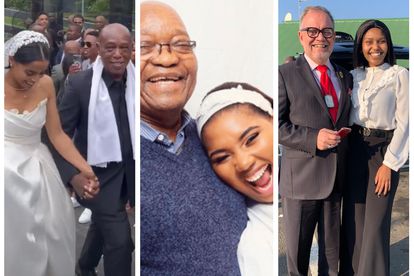 Tokyo Sexwale, Jacob Zuma and Carl Niehaus are all romantically linked to women significantly younger than them.
Images via Twitter

Tokyo Sexwale, Jacob Zuma and Carl Niehaus are all romantically linked to women significantly younger than them.
Images via Twitter

The 69-year-old father-of-three walked down the aisle for the second time, with a bride half his age.

But Tokyo isnt the only public profile flaunting a younger model.

In pics circulating online, Tokyo Sexwale and his new bride Natacha are seen exiting a church on their wedding day on Saturday 5 November.

The ceremony took place at the Inimitable Wedding Venue in Muldersdrfit and was attended by close friends and family.

The 31-year-old bride wore a strapless ballgown, with a lace veil that covered her head. Her husband – who is 38 years older than her – wore a black suit and a white scarf over it.

The couple started dating in 2013 when Natacha was a 22-year-old student and Tokyo was 60 years old.

In 2016, the couple welcomed their first child, a baby boy. Tokyo Sexwale is also a dad to son Chris and daughter Gabrielle with his first wife Judy van Vuuren

Like Tokyo Sexwale, Carl Niehaus married a woman significantly younger than him.

The 62-year-old ANC stalwart is married to 27-year-old model Noluthando Mdluli. The couple also recently announced that they had made things official.

Also on the list is Minister of Police Bheki Cele whose beautiful wife Thembeka Ngcobo is 20 years his junior.