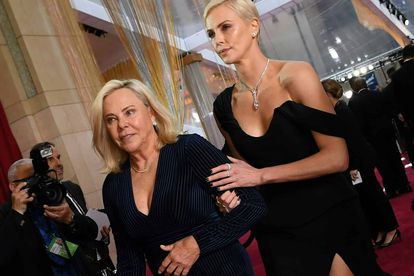 The lanky award-winning actress has long been outspoken about domestic violence having experienced it as a teenager herself.

On 21 June 1991, Theron’s alcoholic father, Charles, threatened the 15-year-old Charlize and her mother, Gerda, in a drunken rage, physically attacking Gerda and firing a gun at both of them. Gerda managed to retrieve her own handgun and shot back, killing her husband. The shooting was legally adjudged to have been self-defence, and her mother faced no charges.

This haunting memory has served as the catalyst for Theron’s efforts to assist women in similar abusive situations.

In addition to her Charlize Theron Africa Outreach Project, she has launched the #TogetherForHer campaign to make sure that women and children remain safe during lockdowns in the United States (US) and Africa.

Through her outreach project, R18.9 million has already been donated to the COVID-19 global crisis with R9.4 million going to the non-profit organisation CARE and Entertainment Industry Foundation to fight domestic violence.

Female celebrities rise to the occasion

“[One in three] women will experience gender-based violence in their lifetime. In the past year, 243 million women & girls have. Humanitarian crises like #COVID19 only make this worse,” Theron tweeted.

“I’m so proud that these exceptional, powerhouse women heard my rallying cry and are uniting as one.”

‘But what if our homes aren’t safe?’

Theron also posted the following on Instagram: “During this unprecedented global crisis, we are being told to shelter in the safety of our homes – but what if our homes aren’t safe? For the millions of women and children around the world sheltering with their abuser, home can be dangerous.

“That’s why in support of the global fight against domestic violence during the #COVID19 crisis, @ctaop and I are joining forces with CARE and the Entertainment Industry Foundation in standing #TogetherForHer.

“My team is committing $1 million to COVID relief efforts, with $500 000 specifically designated towards our #TogetherForHer campaign, supporting women against domestic violence through the provision of funds and resources to trusted domestic violence shelters around the world. Our rallying cry is this:

“Please join us in showing women experiencing domestic violence that they are not alone – we are behind them, with them, for them, #TogetherForHer.”

Warrior woman on a mission

And speaking of rallying cry…

The blonde bomshell will be blasting into your living room on 10 July in the Netflix movie The Old Guard in which she plays the role of an ancient immortal warrior, Andromache of Scythia (aka Andy), tasked with saving the world.

Of her role, Charlize Theron has said:

“I think a lot of people can relate to that at this moment in time. We go through periods in life where we just look at the world and go, ‘Oh my God…’ You just feel like you’re pushing a rock up a mountain.”

Concern over abuse of women during lockdown has increased around the world, with calls to domestic violence hotlines in Europe rising by as much as 60% during the pandemic.

The UN agency for sexual and reproductive health (UNFPA) has estimated that there would be 31 million more cases of domestic violence worldwide if lockdowns continue for another six months.

Mlambo-Ngcuka said the UN is calling for governments across the world to increase support for victims.

“It is important for governments to make the prevention and redress of violence against women and children a key part of their national response plans for COVID-19. Shelters and helplines for women must be considered an essential service for every country with specific funding and broad efforts made to increase awareness about their availability.”

Recently, the Western Cape Women’s Shelter Movement and the Western Cape Department of Social Development have collaborated on “first-stage” shelters, where victims of domestic violence, and other forms of gender-based violence (GBV) are screened and tested for COVID-19, and are then homed in the shelter.

More than 120 000 victims rang the national helpline for abused women and children in the first three weeks after the lockdown started on 27 March – double the usual volume of calls.

South Africa had been grappling with the scourge of violence against women long before the lockdown was imposed.

A woman is killed every three hours in South Africa, according to police statistics – a rate five times the world average. Half are murdered by men with whom they had a close relationship.

President Cyril Ramaphosa has condemned the surge in domestic violence “during a time of such difficulty for our country”.

“It is disturbing that… women and girls are being terrorised inside their own homes, forcing them to make desperate calls for help,” Ramaphosa said in one of his weekly “From the Desk of the President” e-mail updates.

But rights groups have been disappointed by the lack of action, claiming they have not received any government support since the announcement.