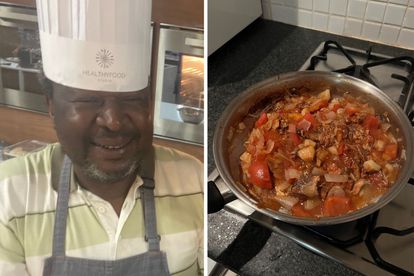 With inflation and record prices of cooking oil, one would be forgiven for trying to save cash by using alternatives. But when it comes to Tito Mboweni, any culinary advice should seriously be questioned, claimed his social media followers.

Known for his unconventional cooking, the popular Twitter personality had his 1,4 million followers shook at his latest endeavor.

But despite recently taking a cooking class with Discovery, it seems the former Reserve Bank governor has gone back to his old ways of cooking.

With enough onions, tomato, and garlic to feed a very large family, Tito threw everything into a pan.

Bizarrely, Tito decided not to use oil, but replace it with water instead!

He tweeted: “I am trying something new today. Using water in the place of olive oil. Interesting!”

The fish was cleaned and then added to the “boiling” vegetables.

The next step – the one of him cleaning off his plate – is missing from the Twitter cooking class. Was Tito Mboweni’s meal edible or not?

TWEEPS ARE  NOT IMPRESSED

But whilst followers expressed their faith in Tito Mboweni’s recently “improved” meals, his oil-free dish on Monday had tweeps completely turned off.

@LeeThobela: “Your meal looks unappetizing and horrible. My cat won’t even appreciate that”

@BrianMatonsi: “You are a rubbish chef. Rather buy takeaways or marry a woman who can cook”

@Hlabi004: “It must be smelling like crazy in there”

Yoh! Everything is swimming as per usual???? pic.twitter.com/LLPgt14Wug