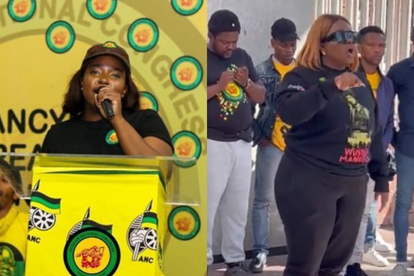 Another one of former president Jacob Zuma’s daughters has been dragged on social media. This time it is Thuthukile Zuma who was called out for having double standards after she called on rape-accused minister Enoch Gondongwana to be removed from his position.

Many people instantly reminded Thuthukile that her father was also accused of sexually assaulting Fezekile Kuzwayo, also known as Kwezi – and basically nothing was done about it.

Thuthukile Zuma has received an earful from social media users after a video of her addressing a small crowd in Qherberha started circulating online.

In the video, young Zuma discusses the rape allegations levelled against the country’s Finance Minister Enoch Godongwana which were made by a massage therapist and employee of Kruger Shalati at Skukuza in the Kruger National Park.

According to Zuma, who was among the supporters of Zintle Msindwana at a recent court sitting, political leaders who are accused of sexual assault or gender-based violence must step down from their positions with immediate effect.

“We ourselves have leaders who have been accused of being perpetrators and we are saying to these leaders that we might love you but as soon as you have an accusation of being a perpetrator of gender-based violence you must do the honourable thing; you must step aside. Not the factional step-aside of the ANC, but you must step aside because you take the gender struggle seriously,” she said while adding:

“So, the likes of your Enoch Godongwana must step aside because he must show that as a leader of society and a leader of the ANC, he takes the gender struggle seriously. He must step aside and allow the courts to take their course without embroiling the name of the ANC and GBV in one sentence.”

After watching the video, many people instantly reminded her that in 2005, her father was also accused of rape but did not step down.

In fact, only a few years later he went on to be the country’s president while the rape allegations loomed over his head.

“Family appointed Chief of Staff why didn’t you tell your own father not to run for the presidency after a young HIV+ woman has told the entire country that he without the condom has raped her? Where were u when this woman was crying about a man she regarded as a father raping her”

“Your father took a shower instead of stepping aside. Remember Khwezi”