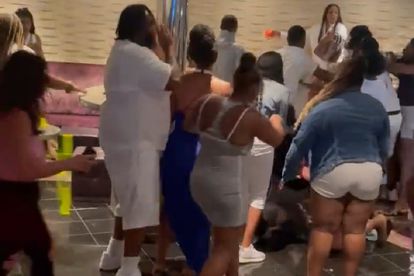 The wild fight, which was captured on camera and has gone viral, erupted on Tuesday 28 June between approximately 60 people on the dance floor of a Carnival Magic cruise ship that was headed to New York.

The fight, which began on the fifth floor of the vessel around 02:00, was joined by roughly 60 people who began punching and pushing. The brawl reportedly concluded on the first floor.

Further explaining, James said that beer bottles were smashed, and a woman may have been cut during the fight.

The witness called the violent passengers “ignorant fools acting stupid” and she applauded the security staff who intervened and attempted to fix the situation.

Another passenger, who took to Twitter to share clip of the chaos on the Carnival cruise ship, said he was at the bar listening to his music and “sipping a Shirley Temple, then the brawl broke out of nowhere!”

“It was the last night so i guess they wanted to go out with a bang, but a lifetime ban from cruising is wild,” he said, adding that there were injuries from broken glass.