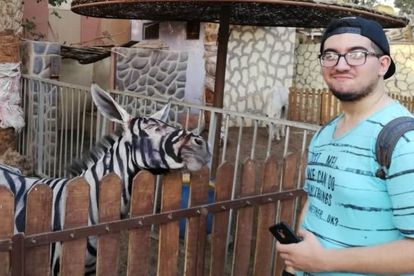 Cairo student, Mahmoud A. Sarhan with the rather curious looking “zebra”. (Photo: Facebook)

Cairo student, Mahmoud A. Sarhan with the rather curious looking “zebra”. (Photo: Facebook)

In a bid to attract more patrons, the staff at an Egyptian zoo got a little too creative for their own good when they reportedly tried to pass off a donkey as a zebra.

According to Joy Online, a common donkey found itself at the newly-opened International Gardens Municipal Park in Cairo, with a complete makeover as it was painted with black and white stripes, which was done as a means to deceive visitors into thinking that it’s its wild cousin.

The weather blows the donkey’s cover

Student, Mahmoud A. Sarhani posted photos of this strange looking “zebra” on his Facebook page, as its disguise had been compromised by hot weather which caused the paint to melt and smudge, attracting attention – but not the desired kind as the zoo came under fire.

The Facebook post was picked up by mainstream media in Egypt and the zoo’s director, Mohamed Sultan, was contacted by the radio station, Nogoum FM, which demanded an explanation.

Read: 19 Pictures of South Africa’s National Parks that will make you want to visit immediately

Sultan is said to have denied that the zoo has, in its premises, a fake zebra but multiple veterinarians did confirm that the animal in the photos was indeed a donkey.

As part of the donkey’s curious new look, its mane had also been trimmed to make it look pointy, resembling that of its (naturally) striped cousin. However, one of the dead giveaways was that it did not extend forward past its ears. Its much longer ears also blew its cover and revealed its true identity.

This is not the first time a zoo had come under fire for trying to pass off a donkey as a zebra. After two zebras had died in a zoo in Gaza, two donkeys were called upon as replacements.

Read: Only in South Africa: Young lioness hitches a ride on a Zebra