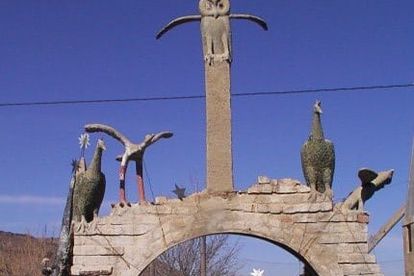 It exists, as a museum called The Owl House in  Nieu-Bethesda in the Eastern Cape

The Owl House was formed when she turned her house and the area around it into a  visionary environment, elaborately decorated with ground glass and containing more than 300 statues and montages including owls, camels, pyramids, peacocks, and people. Martins (1897 – 1976) started working on her vision after her parents died in the 1940s.

Helen took her inspiration from Omar Khayyam, William Blake and Biblical texts to create the sculptures, pointing to the East because of her fascination with Mecca. People have been making the trek to see what Helen and Koos created for decades and Nieu-Bethesda has become one of South Africa’s most visited gems.

The story of Helen and Koos has become a play, Wirework, written by Daleen Kruger. It was originally written in Afrikaans and called Draadwerk and was first performed in South Africa in 2009. It has been translated by Idil Sheard for the London staging.

Starring Elaine Wallace, once famous for her alter ego Mitzi Wildebeest, a one-woman show that became an international hit, as Martins, and Cape Town-born actor Kurt Kansley, soon to play Che at the Sydney Opera House’s production of ‘Evita’, as Koos Malgas, who cared for the site until his death.

“I met Daleen when I went to look at the Owl House,’ says Elaine. ‘I didn’t know much about Helen Martins and Daleen told me about the play. I read it in Afrikaans and couldn’t wait to be involved. It’s been a real journey for me and I believe this play is going to travel as well. Quite a few people seem interested in it.”

Wirework is staged for seven performances only from July 3rd to 7th at the Tristan Bates Theatre in Tower Street, London WC2H 9NP.