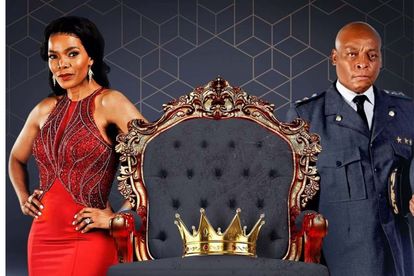 Viewers of The Queen were thrilled to see actor Rapulana Seiphemo (Hector Sebata) join Mzansi Magic’s telenovela in season five because of his on-screen romance with Connie Ferguson on Generations: The Legacy.

The duo didn’t hit it off right away like their characters on Generations: The legacy but will eventually develop feelings for each other this season.

We caught a glimpse of their on-screen romance towards the end of season five when the duo opened up to each other in Harriet’s (Connie Ferguson) bedroom.

HARRIET AND HECTOR ARE BETTER THAN KARABO AND TAU

Karabo and Tau were mushy, romantic, and cute while Hector and Harriet are aggressive, violent, and emotional.

The duo will see each other in a different light according to the July teasers and have their first kiss this Friday (30 July).

Things will get tricky for them towards the 2nd of August when Hector’s wife Zandile Msutwana (Vuyiswa) returns.

But fans of the duo should not lose hope as their feelings for each other will grow this season and they’ll eventually have to admit that they’re meant to be together.

OTHER RIVALS THAT DATED

The Queen is known for making rivals on the show fall in and out of love:

Jessica Nkosi and SK Khoza’s characters dated, got engaged, and ended things after they couldn’t reach a mutual agreement.

Loyiso McDonald and Zenande Mfenyane’s characters had a rocky start but eventually got married and had a baby.

The duo plan to leave the Khoza mansion and start over in another province as Loyiso McDonald has bid farewell to the show.