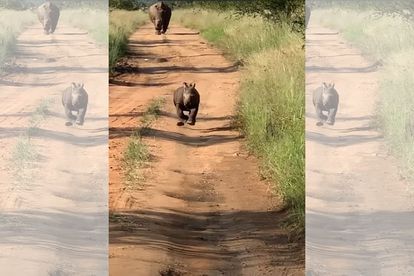 A new video shows a baby rhino playing on a dirt road, barely containing its excitement!

The baby rhino was captured on video by a 37-year-old international shipping business owner, Darren Sheer, while on safari with his family in South Africa.

It all started while on a game drive when the game ranger saw a mom and baby rhino in the distance.

“The ranger stopped the safari vehicle on the gravel road – quite a distance from the two rhino and waited for the rhinos to come closer,” he explained.

“The mom and baby were slowly walking down the gravel road, when all of a sudden the baby rhino got super excited and started running up and down – coming quite close to the safari vehicle and then running back to its mom. After all that excitement, the mom and baby walked through some mud puddles and off into the distance.”

Darren was grateful to be able to see this very rare and special moment. His advice to others is to sit back and enjoy any moment like this – and to make sure you capture the moment with your own eyes and not only through a lens.

“For Darren and his family, it was a heart-melting moment and was almost like watching a new puppy find its feet,” LatestSightings concluded.

The most excited baby rhino?

The internet loves these adorable animals

The internet seemingly loves looking at baby rhinos. Last year, a baby rhino taking a mud bath also went viral. The Thula Thula Exclusive Private Game Reserve situated in the heart of Zululand, in the province of Kwa-Zulu Natal, recently shared the video saying the baby rhino is highly protected by her mother.

“Highly protected by her mother, we had very few sightings of the calf (Sissi) so far. Mona (her mother) is gaining more confidence and trust that she lives in a safe environment as we see her more and more in open grassland,” the game reserve said at the time. “A true blessing, the first rhino baby born on former Zulu Royal Land in over a century and a blessing during this critical time.”