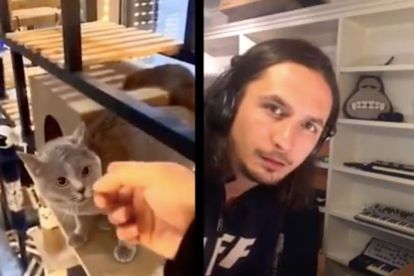 David Scott from The Kiffness reckons he has just released what the man himself is calling his “most ambitious internet collab to date”. And that certainly is saying something.

The South African musician posted his mash-up mix with another whacky internet sensation currently going a little viral – the “Alugulug cat” on Wednesday and sent his fans on social media into a spin. The Kiffness has released a few zany tracks in his time, but he thinks that this tune featuring the internet’s latest viral cat is the best of the bunch.

The Kiffness has teamed up with a cat who caught the world’s attention after its owner managed to bring out the best of its vocal talents – and the cat has some serious range to boot.

Praise for the Kiffness’ skills was widespread, and seems to have spread to his furrier followers too.

“My dogs love this! They even run outside and bark to ask the neighbourhood dawgs to bark along. My cat on the other hand looks like she is preparing for battle,” said a Facebook user.

“Rubbish the cat is stressed!! You laughing and making a song out of his misery!!,” said another user, while one said, “my dachshund Alice got upset and told me to turn off! She is not a fan of kitty-cats”.

Some users had some constructive criticism for Scott. “Think it would have been awesome as mix if you did not sing about you and the cat… The sad cat poem kinda put me off.. I really enjoyed it up until there… Kind took away the song’s potential,” wrote a finicky Facebooker.

The internet is a wild place…