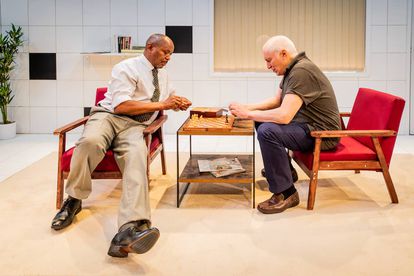 We’re used to the likes of Fugard’s Master Harold and The Boys, which is on stage at the National Theatre, or something about the quirky Helen Martin and Owl House at Nieu-Bethesda.

Currently, however, at the off-West End gem of a theatre, the Jermyn Street Theatre, is a beguiling play about former president Jacob Zuma and Ronnie Kasrils, the man who once ran South Africa’s intelligence service. They find themselves, coincidentally, in adjacent rooms in the same smart private hospital talking about the good, and bad, old days in the anti-apartheid struggle.

What is The Ice Cream Boys about?

The play is by the award-winning Johannesburg-born Gail Louw and doesn’t skip a beat as the two men, older and wiser, knock the hell out of each other, debating and bickering and also laughing. They dig out quite a few old skeletons from various cupboards as the disgraced Zuma is confronted by his one-time spymaster.

The result is an illuminating war of words as the former President defends his record and his one-time colleague accuses him of betraying the ideals they fought for.

As one reviewer said: “They pad around each other like grizzled old lions.”

Refreshing and poignant with quick dialogue like ’stress is a white man’s problem’ and ‘moralities sold to the highest bidder’, it’s a 90-minute straight-through piece of theatre starring an impeccable cast that is Jack Klaff as Kasrils, Andrew Francis as Zuma and Bu Kunene, who is a match for them both, skillfully portraying three characters: the men’s nurse, Nelson Mandela and Kasrils’ first wife.

The Ice Cream Boys is strongly recommended; a good night out in an intimate venue.