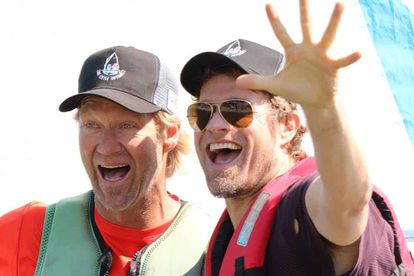 The race will see 40 Little Optimists navigating the waters at the foot of the iconic Table Mountain, with celebrities, corporates, charities and medical survivors on board.

The project is the brainchild of big wave surfer and charity campaigner Greg Bertish, who himself survived two open-heart surgeries and spent 200 days in hospital. Bertish is adamant it was his love of the water and sailing in particular that gave him hope during that dark time.

The celebrities, CEOs and medical survivors

The light-hearted rivalry between the teams became immediately apparent at the first training session at Zeekoevlei Yacht Club. The stakes are high, as the winning team not only carries the title of winner, but will have the opportunity to raise the most money for children across the Western Cape.

Local musician, Arno Carstens has already scheduled some sailing lessons to try and increase his chances of winning, and told DA chief whip John Steenhuisen that he “is going down”.

Steenhuisen jokingly replied, “I’m used to sailing close to the wind and I’m getting ready to take the wind out of Arno’s sails.”

Other celebrities taking part in the charity race are former supermodel Josie Borain, Survivor SA runner-up Jeanne Michel, who is currently sporting a cast on her leg after snapping her Achilles tendon, and Cape Talk’s Kieno Kammies. Competing against them will be shark spotter Monwabisi Sikweyiya and heart surgery survivor Adam Klopper, amongst others.

Where will the money go?

All funds raised at the event will go to the Little Optimist Trust as well as the other charities participating in the race, such as the NSRI and the Newborns Trust. The intent behind the race is also to set up a development sailing academy for at-risk children.

As someone who spent more than 200 days in hospital, Bertish hopes that the race will inspire others, and particularly help provide children with the confidence to overcome the obstacles that life has thrown at them.

“Kids face tough operations and uncertainty. I hope to show them that sick people can still go on to achieve amazing things,” he says.

Details of the event

Greg will also be hosting sailing lessons for children from underprivileged backgrounds at the Boat Show.

For more information or to pledge support for the project, visit thelittleoptimist.org