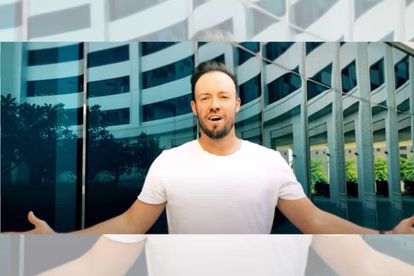 It is said that the song was released in light of De Villiers who wants to unite South Africans with a message of hope and solidarity.

“This is just a song of hope and sort of a cry out for us to stand together. We are walking through a fire – you’ll hear the lyrics talking about running through a fire – if we do it together we can sort of create flames which can turn into a positive thing,” he said according to KFM.

Different parts of the world

It was shot in different parts of the world. According to the YouTube music video description, the song was filmed in Cape Town, Limpopo and Dubai.

“Filmed and recorded with Karen Zoid in Cape Town, the Ndlovu Youth Choir in Limpopo and AB who currently is in Dubai for the IPL cricket tournament,” reads the description.

A song of hope

Karen Zoid explains the motivation for the song in an interview with SA Music Mag.

“In the chorus, I’m singing ‘We fan the flame’ while the others sang ‘We found the flame’. The flame, a sliver of fire, has always represented massive hope to people on a physical and metaphysical level. I guess I could have gone back and redone my vocal to match the other voices but I didn’t because it felt right being recorded incorrectly.

“Some of us are celebrating hope and some are still searching for it. But we all want to sing a song of hope. Out of an imperfect song and an imperfect world, beautiful things do transpire. They always have and they always will,” she explained.