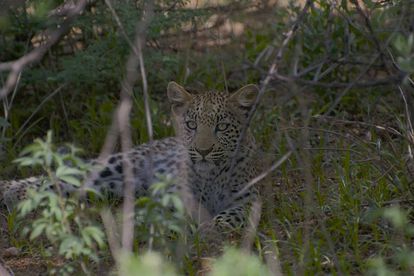 The non-profit organisation, who are “engaged in innovative research, conservation and education projects established to facilitate and promote the conservation of biological diversity” shared the photo on Facebook saying that it is a “thrill to see leopard cubs on our The Cape Leopard Trust camera trap photos”.

“Usually there is only one cub, occasionally two. So to find three cubs on one photo is truly a rare occurrence – that is why we are bursting with excitement about this image!”

The organisation went on to explain that female leopards are pregnant for 100 days (called the gestation period) and usually will have two to three cubs in a litter.

“Little is known about the reproductive success of leopards in the Cape mountains, but it is a very tough environment and cub mortality seems to be high, especially in their first few months. Black eagles, baboons and malnutrition are great risks in these early stages. If a female is successful in raising young, the inter-birthing period (time between litters) is 18 months to two years.”

These cubs are said to be very young.

“We hope to see some more photos of them in the coming months – watch this space!”

The Cape Leopard Trust Facebook page also shared footage of a leopard caught on video in Walker Bay, a coastal nature reserve in the south-western Cape.

The video, shows rare footage of a leopard named Luka at the Walker Bay Fynbos Conservancy (Wbfc). In the footage, the female can be seen marking trees in the area as she scratches and rubs up against them. According to the Cape Leopard Trust, the fine specimen in the video is one of less than 1 000 leopards who call this area home in modern times.

“Leopards are territorial and solitary and do not encounter other leopards very often – especially in the Cape mountains where density is very low. They, therefore, rely heavily on chemical communication to convey messages about their presence, strength and reproductive state. The volatile chemical compounds in urine, scat and glands can persist for weeks and will thus remain present at a marking site long after the marking animal had left,” the organisation explained further.