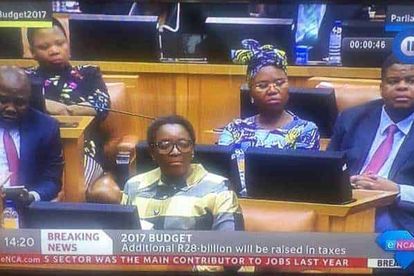 While Pravin Gordhan’s budget was a bitter pill to swallow, representatives from all political parties applauded the minister’s efforts. Ok, so maybe not everyone was as please with Gordhan’s budget, or perhaps they weren’t so chuffed that his popularity continues to surge, making it near impossible to surplant him?

Regardless of why, opposition MPs tweeted an image of social development aka Oyster Box minister Bathabile Dlamini; state security aka dodgy massage parlour minister David Mahlobo, minister of small business aka we’ve yet to see her accomplish anything Lindiwe Zulu and finance minister for a weekend turned minister of cooperative governance Des van Rooyen.

While the National Assembly as a whole applauded Gordhan, these four were visibly unimpressed with Gordhan and did nothing to hide their contempt.

There are increasing calls within the ANC for Gordhan to be replaced in an effort for the Zuma camp to get their hands on National treasury and, judging by these four faces, we might assume that they’ll be leading the charge on the state coffers.