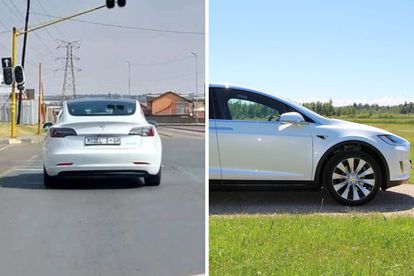 South Africans on social media are amused after spotting electric car Tesla – the brainchild of businessman Elon Musk – in Mzansi, amid loadshedding.
Image via Facebook/Pixabay

South Africans on social media are amused after spotting electric car Tesla – the brainchild of businessman Elon Musk – in Mzansi, amid loadshedding.
Image via Facebook/Pixabay

With rising petrol prices, South Africans would be wise to invest in electric cars, like Tesla, created by one of Mzansi’s own: billionaire businessman Elon Musk. Except for one two small problems – Eskom and loadshedding!

Electric vehicles are undoubtedly the future of transport – not just on roads, but on seas and skies, claims Elon Musk.

And from the looks of it, the future is already here, after a Tesla was spotted on the streets of Jozi.

ALSO READ: Is it a bird, a plane? It’s a ‘Flying Tesla’! Cops offer reward for ‘stuntman’

Facebook page Polow Stance – dedicated to love and appreciation of cars – posted a picture of a white Tesla Model 3 with a Johannesburg number plate.

The car was seen in the suburb of Westbury, slowing down at a set of robots, which were ironically out of action due to loadshedding.

And followers were quick to notice it too.

Mateen Thabo: “And the traffic lights are out… how ironic! Tesla + Eskom = [crying with laughter face]

Reshano Fernando Gallant: “Hope he got a U.P.S OR GENERATOR in his boot”

Kevin Thyssen: “The irony. Huge Eskom powerlines above the powerless traffic lights. While sitting stationary, in an electric vehicle”

Billy Shields: “But there’s never any electricity to charge the thing. Not a good car for SA”

ARE ELECTRIC CARS COMING TO SA?

Unfortunately for SA, Tesla has no imminent plans to sell their electric cars in the country.

However energy and e-mobility Rubicon not only acquired a Tesla Model X – which they driving around the country in a bid to raise awareness about the brand – but the rights to sell the car’s charging infrastructure in SA.

Rubicon director Gregory Blanford told News24: “Everyone is aware of the brand, and it’s a very famous one. And because we are Tesla’s partner in South Africa on energy products, it made sense for us to bring a Tesla into the country.”

He added: “I think South Africa has a bit of catching up to do because we’ve only seen a few EV models come into the country. Whereas the rest of the world has a larger variety. So hopefully, by running this campaign with the Tesla, we can get our government excited about what’s to come and let the public experience these new technologies.”

According to the Daily Maverick, South Africans have a very limited selection of fully electric cars to choose from. They are: the BMW i3, BMW iX, Mini Cooper SE, Jaguar I-Pace, Porsche Taycan, and Taycan Cross Turismo, as well as the Volvo XC40 Recharge.