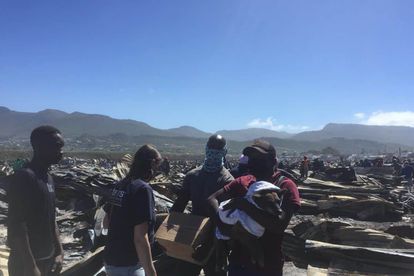 TEARS Animal Rescue is asking the public to help animals who were affected by the devastating fire in Masiphumelele situated between Kommetjie, Capri Village and Noordhoek.

It is said that the fire caused great devastation in the area, destroying about 100 homes and displacing an estimated 6 000 people. The animals in the area have also been deeply affected.

“We are in Masi now and the devastation is so REAL. Please help. Our hearts are breaking,” TEARS Wrote in a Facebook post on 18 December.

According to Cape Town etc, the fire has since been contained, but cleanup crews are still busy clearing the damage from the fire before residents can begin rebuilding their homes. In the meantime, TEARS is calling on the public to help the animals as they are in need of pet food, blankets, supplies for the community and donations to assist the TEARS Welfare Clinic with veterinary supplies for treating burns and smoke inhalation.

How to Donate to TEARS

“TEARS Animal Rescue is safe from the fire,” they said further. “The fire has been under control since last night. The wind continues to rage so there is still a risk of flare ups.”

Coordinating the community response to the fire

Minister of Human Settlements, Water and Sanitation Lindiwe Sisulu is expected to visit Masiphumelele on 21 December.

Sisulu’s spokesman Steve Motale said: “A few days ago, Minister Sisulu directed her director-general, Mbulelo Tshangana, to work with Western Cape provincial government in finding an immediate relief to people’s housing challenges. She further appealed to all South Africans including the private sector and NGOs to assist the affected community members with essential items such as food, clothes, blankets, and protective equipment.”

NGO Living Hope is coordinating the community response to the fire, and has called for volunteers to help sort through the donations which have poured in.

Founder John Thomas said they are aiming to pack and distribute 1200 parcels of food and essentials on Christmas Eve, for which they are still looking for help and donations.

“It is my personal hope that by Thursday, Christmas Eve, folk will be able to be in their new shack homes and that we will be able to give them as much bedding and clothing household goods that we have at that point,” Thomas wrote on Facebook.