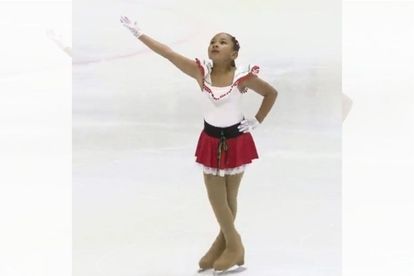 After the eight-year-old Tamika van As recently won a gold medal at the National Figure Skating Championship in the juvenile competitive section at Forest Hill City in Centurion, Gauteng, the ice skater from Bonteheuwel told Carte Blanche that she is setting her sights on competing at the Olympics.

Tamika van As on becoming an Olympic athlete

“From the Cape Flats comes an inspirational story of a little girl who escapes her everyday reality in the ganglands of Bonteheuwel by dreaming of becoming an Olympic athlete on the ice rink,” they described.

Following her successes, many publications reported on the little girl’s dreams. Mail & Guardian said that the

e grade three learner is actually the youngest of 36 solo skaters at the Black Panthers Ice Skating Club in Cape Town and started ice skating in 2017.

Here she was handed two badges, representing two levels, pre-beginners and beginners, on her first day of attendance. Her father, Graham van As, proudly says there are skaters aged 16 and 17 who have only three or four badges. She is now looking to compete at the Olympics one day.

“Everything she touches she wants to do her best,” says her father, who is a table-tennis coach in Bonteheuwel. “It is not just skating: she has a lot of talents. Her table tennis is just as good, while her next step is football.”

Tamika now looks forward to competing in the Western Cape Championships that will be held later this year. But there are some challenges of living in Bonteheuwel.

Tamika is one of the thousands of children living in fear on the gang-and-crime-riddled Cape Flats. Bonteheuwel is 10km away from the Grand West Ice Station.

“I cannot take her on an early-morning run to exercise: it is too dangerous,” says her mother, Tarren. Tarren recalled a shooting incident during which Tamika ran to stand against a wall.

“We pray for our safety going to and driving back from the rink,” says Tarren. But, Tarren does not want her child to become part of the guns and stone-throwing culture and hopes that Tamika doing well in figure skating “can be a motivation for other children”.