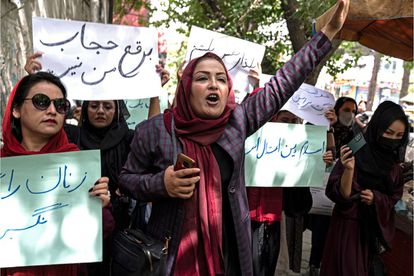 Members of Afghanistan’s Powerful Women Movement, take part in a protest in Kabul on 10 May 2022. About a dozen women chanting ‘burqa is not my hijab’ protested in the Afghan capital on May 10 against the Taliban’s order for women to cover fully in public, including their faces. Image: Wakil Kohsar / AFP

Members of Afghanistan’s Powerful Women Movement, take part in a protest in Kabul on 10 May 2022. About a dozen women chanting ‘burqa is not my hijab’ protested in the Afghan capital on May 10 against the Taliban’s order for women to cover fully in public, including their faces. Image: Wakil Kohsar / AFP

About a dozen women protested in the Afghan capital on Tuesday against the Taliban’s new edict that females must fully cover their faces and bodies when in public.

Afghanistan’s supreme leader and Taliban chief Hibatullah Akhundzada issued a mandate over the weekend ordering women to cover up fully, ideally with the traditional all-covering burqa.

The diktat was the latest in a series of creeping restrictions in Afghanistan, where the Islamists have rolled back the marginal gains made by women after a US-led invasion toppled the first Taliban regime in 2001.

“Justice, justice!” chanted the protestors, many with uncovered faces, in central Kabul.

The demonstrators also chanted “Burqa is not our hijab!” – indicating their objection to trading the less restrictive hijab headscarf for the totally concealing burqa.

After a short procession, the march was halted by Taliban fighters, who also obstructed journalists from reporting on the event.

Akhundzada’s decree, which also orders women to “stay at home” if they have no important work outside, has triggered international condemnation.

“We want to live as human beings, not as some animal held captive in a corner of a house,” protester Saira Sama Alimyar said at the rally.

Akhundzada also ordered authorities to fire female government employees who do not follow the new dress code, and to suspend male workers if their wives and daughters fail to comply.

In the 20 years between the Taliban’s two stints in power, women made some gains in education, the workplace and public life but deeply conservative and patriarchal attitudes still prevailed.

In the countryside, many women continued to wear the burqa in those two decades.

But several religious scholars and activists say the attire has no basis in Islam and is rather a Taliban dress code designed to repress women.

After seizing power last year, the Taliban had promised a softer version of the harsh Islamist rule that characterised their first stint in power from 1996 to 2001, but many restrictions have already been imposed.

Some Afghan women initially pushed back against the curbs, holding small protests where they demanded the right to education and work.

But the Taliban soon rounded up the ringleaders, holding them incommunicado while denying that they had been detained.

Since their release, most have gone silent.