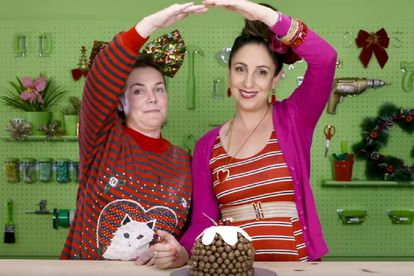 It’s almost Christmas and everyone needs a good idea for a Christmas pudding! That’s why SA’s favourite DIY specialist, Suzelle shared a new web episode featuring all the trimmings needed to make her Christmas Pudding.

Joining her in studio, is her best friend, Marianne.

For the decorations, you’ll need:

Suzelle goes on to demonstrate how to make her decadent Christmas pudding step by step.

“This is the most delicious Christmas dessert you are ever going to lay your eyes on,” says Suzelle.

Suzelle has been sharing unique Christmas ideas for quite some time now.

How to make a Christmas tree:

How to get what you want for Christmas:

How to make a spectacular dessert Christmas tree:

Until now, Suzelle has made more than 100 videos on her web series and has also written three books.

Recently, she teamed up with Comedy Central to host Most Ridiculous with a bunch of other guest celebrities, such as Kurt Darren, Danny K, Amor Vittone, Riaan Cruywagen and more. Suzelle basically narrates some of the funniest video clips found on the internet for the third season of the series.

“While the videos that will feature on Most Ridiculous will not be local, we wanted to weave a local thread into the format of the show. And what better way to do that than to bring on South Africa’s YouTube extraordinaire SuzelleDIY as the host, as well as have some of South Africa’s most loved and revered celebrities co-host the show with her?” Khan said.