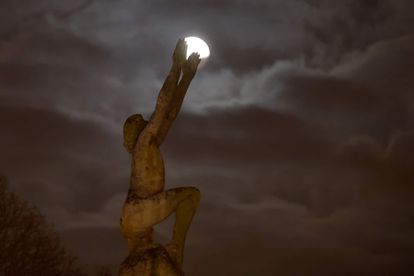 A picture taken on January 21, 2019 in Le Mans northwestern France shows the Super Blood Moon during a lunar eclipse behind the statue named “L’envol”. (Photo by JEAN-FRANCOIS MONIER / AFP)

A picture taken on January 21, 2019 in Le Mans northwestern France shows the Super Blood Moon during a lunar eclipse behind the statue named “L’envol”. (Photo by JEAN-FRANCOIS MONIER / AFP)

We all love a good celestial event. From meteor showers to an epic blood moon – the almighty sky’s got some magic about it.

So, good news then that there’s a supermoon coming on 19 February 2019.

What is a supermoon?

A supermoon is a new or full moon closely coinciding with perigee, the moon’s closest point to Earth in its monthly orbit. So, in simple terms, it’s similar to a full moon but much closer to earth, making for some breathtaking views.

According to astronomers, there will be three supermoons in 2019. One of them – the bloodmoon – already happened. The next one will be on 19 February 2019.

Is there something special about the February supermoon?

Supermoon is not its official name

Supermoon is not an official astronomical term. It was first coined by an astrologer, Richard Nolle, in 1979. He defined it as ‘a New or a Full Moon that occurs when the Moon is at or near (within 90% of) its closest approach to Earth in its orbit’. It is not clear why he chose the 90% cut off in his definition.

Last year, an unusual set of celestial circumstances came together over for sky watchers in Europe, Africa and the Americas, where the moon was fully obscured before lighting up again with a faint red glow – also known as the blood moon.

The eclipse lasted about three hours: during the first hour the full moon was gradually swallowed up by the shadow of the Earth, then an hour of total eclipse where it was not invisible but instead appeared tinted in hues of red, orange and pink, followed finally by its full reemergence, bright and shining.

Supermoon in South Africa on 19 February 2019

Moonrise will be just before 18:00 on February 2019 in South Africa, so those in the northern parts of the country are likely to get the best view.

It doesn’t mean the rest of us won’t be treated to epic views. The moon will be bigger and brighter for everyone, but will depend on weather for peak visibility.

Expect the night sky to be brighter on the night. If, for whatever reason, you’re not able to catch a glimpse, here’s a look at some photos of previous supermoons from around around the world.

Supermoon and full moon in pictures – through the years