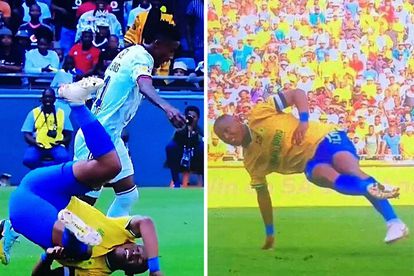 Sundowns midfielder Andile Jali became a laughing stock on social media over his embarrassing fall in a match against Orlando Pirates.
Images via Twitter

Sundowns midfielder Andile Jali became a laughing stock on social media over his embarrassing fall in a match against Orlando Pirates.
Images via Twitter

Andile Jali was reminded of his past transgressions by soccer fans on social media after an embarrassing fall during a Mamelodi Sundowns vs Orlando Pirates match over the weekend.

And it has everything to do with a mocking tweet he posted back in August about his former team.

In clips that went viral, the Sundowns captain was seen being floored after he attempted to dribble a player from the opposing team.

Sundowns and Pirates faced off in the MTN8 semi-final on Saturday in Orlando. The teams drew 0-0.

In the clip, Andile Jali tried his best to tackle Pirates player Monnapule Saleng who was in possession of the ball. Unfortunately, Jali miscalculated his steps and ended up slipping and clumsily rolling over.

The 32-year-old – who previously played for Pirates from 2009-2014 – was later substituted with Bongani Zungu.

The incident proved entertaining for soccer fans who mocked the clip with memes of a floored Andile Jali.

And being a good sport, Andile Jali joined in too!

However, tweeps also reminded Andile Jali of his previous social media posts in which he threw shade at Pirates’ placement in the MTN8 back in August.

And many believed his fall was “karma” for his actions.

@KcZwide: “Andile Jali posted this couple of weeks ago, little did he know that Karma is the bitch

@PhilaniMhlongo_: “Andile was supposed to fall like that after posting that video laughing at Pirates. Sometimes your ancestors can throw you to your enemies”

ALSO READ: ‘Feels good to be back’: Andile Mpisane brags about soccer career