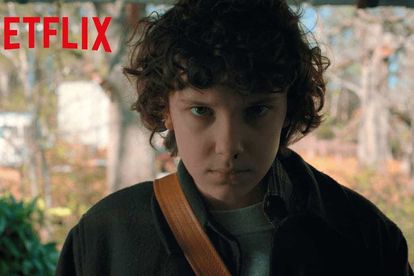 Stranger Things Season 2 is coming! Netflix dropped the final trailer for the new season ahead of its release on Friday the 13th and its as epic as you might imagine.

When will Stranger Things Season 2 air in South Africa?

Which of the cast are returning?

All of the kids will be back. The Stranger Things Facebook page posted this photo from the first script reading for Season 2.  Eleven, Mike, Will, Lucas, Dustin, Nancy, Steve and Jonathan will all be back, alongside new characters Billy and Max, played by Dacre Montgomery and Sadie Sink.

Eleven is going to be back?!

Yep, Eleven is back with a brand new mop of hair as we see in the final trailer.

None of the trailers haven’t revealed too much, but we know that it will begin on Halloween 1984 – which is where the whole Ghostbusters vibe is coming from. Will is getting visions and flashbacks from his time in The Upside Down.

“He seems to be seeing images from the Upside Down—the question is whether they’re real or not,” Matt Duffer, one of the show’s creators, told Entertainment Weekly recently.

The season won’t venture too far out of the fictional town of Hawkins, but we can expect the tussle with The Upside Down to Continue.

David Harbour, who plays Chief Hopper, we can expect some magic.

Speaking to Deadline, he said that “it still contains that magic I think we have in the first season, which is that sort of Amblin Entertainment-esque, Steven Spielberg kind of ‘magic of the movies’ feel to it, but it’s also very different.”

The Duffer brothers have also confirmed that the new series will feel more like a “sequel” than an anthology,