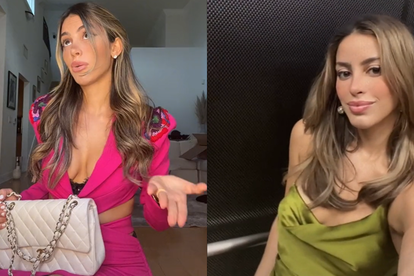 Roma spends her days as a spoiled ‘stay-at-home daughter’ and she loves it. Images via TikTok: @therealsahd

Roma spends her days as a spoiled ‘stay-at-home daughter’ and she loves it. Images via TikTok: @therealsahd

We’d all be lying if we said we didn’t imagine what it would be like to be super-rich and not have to work for a living. One young -woman – a self-professed “stay-at-home daughter” does not need to imagine since this is literally her life. Roma Abdesselam does nothing all day but spends daddy’s money and she does it very well – at least according to her.

While many of us slave over our computers Monday to Friday in order to keep food on the table, a small percentage of people are living their best lives spending other people’s hard-earned cash.

One such person is 26-year-old Roma Abdesselam.

Speaking to The New York Post, Roma shares that she loves spending her parent’s money even though her excessive spending habits have gotten her cut off a number of times – something she added never lasts long.

“I’ve turned spending [my parents’] money as a stay-at-home daughter into a job, and that’s been very, very fun for me,” a giggling Abdesselam, 26, who lives in the chic Flatiron District, told The Post.

Roma, who lives in the upmarket Flatiron District in New York Manhattan, did not want to reveal what her obviously wealthy parents do for a living but did reveal that she spends roughly $50 000 (around R816k) a day on shopping and going to chic pilates studios.

She has gone viral in videos showing her spending heaps of money at luxury stores such as Gucci, Chanel, and Prada. In fact, she now has an impressive $15 million luxury collection of clothes, shoes, and bags.

NO real crimes were committed in the making of this video. Brad I’m just jking about soho house!! I’m in a silly goofy mood today 🤪

Taking to TikTok, she has done a number of videos titled “Stay-at-home daughter: What I spend in day” and as you can imagine, they have gone viral.

Many people have since bombarded the young woman with marriage proposals, friendship- proposals, and hundreds if not thousands of compliments.

Some have also slammed her excessive spending habits as reckless while pointing out that there are many people in the world struggling to make ends meet while she lives carefree.

“You could pay off one year of my student loans [with] that [amount] and it’s not even funny,” scoffed an offended onlooker.

“So [how] much do you spend helping your community and those in need,” questioned another.

ALSO READ: ‘Her shades are my salary’: SA reacts to MaMkhize’s R100k outfit