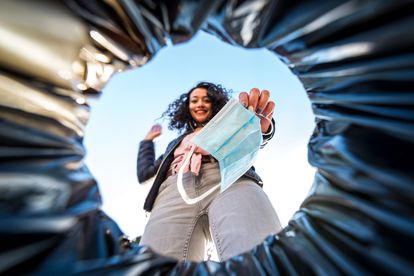 President Cyril Ramaphosa has officially lifted the State of Disaster after two long years of the country being in lockdown amid the Covid-19 pandemic. But if Twitter reactions are anything to go by, South Africans are having very mixed responses…

Whilst some are relieved that the country is on the path to “normalcy”, others are concerned about what that holds for the future.

Then there are those that are questioning and calling for a review of the “real State of Disaster in South Africa”.

ALSO READ: ICYMI: Now that the State of Disaster is done, what happens to the R350 grant?

TO MASK OR NOT TO MASK?

On Monday night, President Ramaphosa revealed in a public address about the State of Disaster that certain regulations like the wearing of face masks indoors will still be in effect for the next 30 days. So to will restrictions on gatherings, social distancing and sanitising.

After 30 days has passed, these regulations will lapse. However, Ramaphosa revealed that “going forward, the pandemic would be managed in terms of the National Health Act”. According to the president, the draft health regulations have been published for public comment, which will officially close on the 16 April 2022. Thereafter, the new regulations will be finalised and promulgated.

On the issue of face masks, many tweeps were relieved to hopefully see the end of that chapter.

“The wearing of masks will officially stop in South Africa after 30 days. Normality has finally come. After two full years” said one tweep.

Another added: “Two years of this madness. Let your shoulders relax and unclench your jaw. Just breathe”.

Others were worried about going back to life pre-pandemic.

One tweep posted: “As tired as we are with Covid-19 and its exhausting laws. Personally, I’d love for masks and social distancing to be kept. For hygienic sake and people not standing too close to us. People are breathing on our faces”.

Many more tweeps, however questioned why masks had to be worn at all following the lifting of the State of Disaster.

THE ‘REAL STATE OF DISASTER’

And whilst Covid-19 mandates may soon be a thing of the past, tweeps are encouraging the president to focus on more pressing issues

“We need to treat unemployment as a National State of Disaster. It needs the same energy”

“Personally, I think we are on the real Natonal State of Disaster. Petrol? Illegal immigrants? Crime? UNEMPLOYMENT”

“You can lift the official State of Disaster but the real state of the nation is a disaster. We still need to solve that. No running away from it”

“Covid-19 was NOT a National State of Disaster … The ANC Government, unemployment, CIT Heists, crime, illegal immigrants, failing SOE’s etc, is a NATIONAL STATE OF DISASTER, hence we are still in a State of Disaster!”