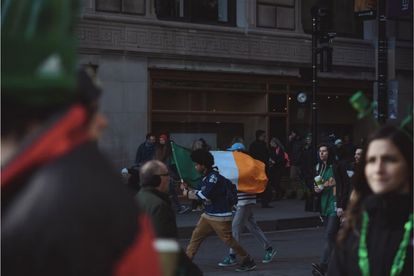 St Patrick’s Day is back in full-swing and will be properly celebrated around the world for the first time in two years. Image via Unsplash.

St Patrick’s Day is back in full-swing and will be properly celebrated around the world for the first time in two years. Image via Unsplash.

Hundreds of thousands of Irish and international visitors were to celebrate St Patrick’s Day in Ireland on Thursday after a two-year pause in festivities due to the coronavirus.

Events celebrating Ireland’s patron saint were some of the first to be called off in 2020 as mass gatherings were shelved, pubs closed and international travel stopped.

But restrictions have been lifted, and organisers are billing this year’s celebrations as a symbol of the country’s return after the COVID-19 pandemic.

Coordinators have promised the centrepiece parade through the streets of central Dublin on Thursday will be bigger and better than ever.

The spectre of fresh Covid measures has hung over events in Dublin, which in normal times would take 18 months to organise.

While planning had been going on in the background, it was only in January that the government announced they expected the parade to go ahead.

“Suddenly, it was like someone just lit a fire under all of us,” McGowan told AFP.

“It has been just one of the most intense planning periods I think this festival has ever seen.”

Up to 400 000 attendees and 3 000 participants are expected at the parade, with 250 contractors involved in preparing the route and erecting stages.

Along the parade route, which is normally swathed almost entirely in green, the Dublin City Council has placed 100 lamp-post banners in the blue and yellow colours of Ukraine.

On bridges over the River Liffey in the city’s beating heart, the Ukrainian national flag will replace the Irish tricolour in some places.

Festival-goers are being urged to bring items like Ukrainian flags to show their solidarity following Russia’s invasion of the country.

Parts of the parade will also reflect on the war, organisers said. At The Temple Bar pub, which shares its name with the busy area that contains many of Dublin’s most famous watering holes, staff were bracing for the busiest day of the year.

Barman Andrew Roche said that with pubs closed until midday, people would be “loaded up” outside waiting to come in after the parade.

“As soon as the doors open, there’s just a flood of people and just a great atmosphere,” he said, explaining the crowds would be “mayhem” and “electric”.

THE BIGGEST ST PATRICK’S DAY IN A LONG TIME

Roche, who had only been working months at the pub when it opened for the last St Patrick’s Day, said he expected “the biggest Paddy’s day in a long time”.

Preparations were being made to make sure the pub “was as efficient as possible”, he added.

On the day, “there’s never a moment where there aren’t five taps pouring beer and there’s constantly beer going out and money coming in,” he said.

St Patrick’s Day is typically celebrated in cities across the world, led by the Irish diaspora and expatriates.

Dublin Airport has said it expects 800 000 passengers to travel through in the 12-day St Patrick’s Day period from 12 March to 24 March.

Kenneth Will, director of the Pride of Dayton Marching Band, travelled to the Irish capital with 130 student band members from the University of Dayton in the US state of Ohio.

Along with taking in Ireland’s tourist sites, the group will be performing in the parade after having to cancel in 2020.

“To come over… and perform in front of the thousands of people here in Dublin is really special to this group, and I know that they’re really excited,” he said.

Irish culture is predominant in the United States, Will said, referring to the millions of people in the country who identify as being of Irish ancestry.

“Whether it’s your ancestors or whether it’s our basic foundation of the university, there are ties everywhere,” he said.