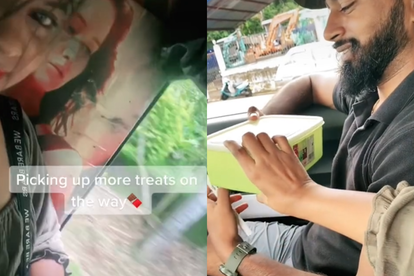 This woman traveled all the way to treat her man who was stuck in a long petrol queue. Image via TikTok @princysdiaries

This woman traveled all the way to treat her man who was stuck in a long petrol queue. Image via TikTok @princysdiaries

A young couple has gone viral on TikTok after the wife captured the sweet gesture she did for her husband. In the clip, the woman learns that her husband is stuck in a long queue reportedly in Sri Lanka while trying to fill up his petrol tank. Instead of leaving him to wait alone, she decided to cook him a hearty meal and deliver it to him.

The video received many thumbs-up from social media users who couldn’t help but gush over how sweet the young couple is.

Woman goes the extra mile to cater to her man

Being in a happy relationship really is top tier.

A big part of a great relationship starts with big and small gestures from both parties.

A young wife has given the best example of what kinds of small gestures really make the world’s difference in a relationship.

Heading to TikTok, the wife, @princysdiaries, shared a heartwarming video that shows her going out of her way to prepare food for her man who unfortunately was one of many stuck in a long queue waiting for petrol.

ALSO READ: ‘It hurts but I’m brave’: Woman says she has ‘most tatted vag in the world’

After she prepared the food, she hoped on a TikTok and then made her way to her man who was pleasantly surprised to see how much effort she made.

In the end, she stays with her man as they wait for their turn to reach the fuel pump.

Watch the cute video below:

The post amassed thousands of views and 86k heart reactions from TikTokers who were blown away. Others prayed for Sri Lanka’s fuel crisis to improve soon.