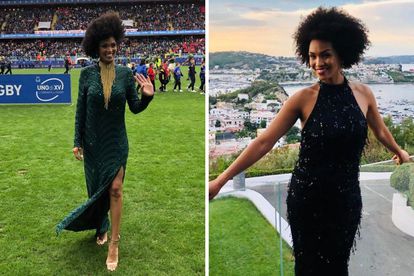 Nicole Magolie has been dragged on social media following her rendition of the national anthem at the Springboks test match against Italy on Saturday.
Image via Facebook
@nicolemagoliemusic

Nicole Magolie has been dragged on social media following her rendition of the national anthem at the Springboks test match against Italy on Saturday.
Image via Facebook
@nicolemagoliemusic

She’s not the first person to be accused of “botching” the national anthem, but hopefully, she’s the last! Nicole Margolie went viral over the weekend for her rendition ahead of the Springboks vs Italy test match in Genoa.

In clips that have trended on Twitter, the woman belts out South Africa’s anthem Nkosi Sikelel’ iAfrika. But not everyone was impressed with her vocals or her performance.

She hails from Cape Town

Nicole Magolie – whom many compared to actress Pearl Thusi – hails from the Mother City but is based in Italy.

Nicole is the lead singer of Diamond Duo, a jazz band that performs on cruise ships and venues around the world.

Apart from her Springboks national anthem performance, Nicole Magoli is a recognisable face thanks to her modelling her luscious locks in print and TV adverts.

Nicole is constantly jet-setting around the world with her band, leaving behind two children; a son and a daughter.

ALSO READ: If not Zeenat, then who? Springboks women deny Jantjies affair

Whilst South Africans have been dragging her on social media, it’s clear she’s brushed off criticism of the experience

She shared in an Instagram post: “The evident and palpable emotion of the Springboks and the South African fans positively overwhelmed me. It was beautiful and I received dozens and dozens of compliment messages. Thank you, everyone.”

When a follower on Facebook poked fun at her performance, Nicole quickly attempted to set the record straight. She replied: “Unfortunately, the conductor started too slow [sic].

“I tried to pick up the speed but I had to follow the band… the acoustics also had a delayed effect on everyone involved, but [the] most important thing is the emotional aspect”.