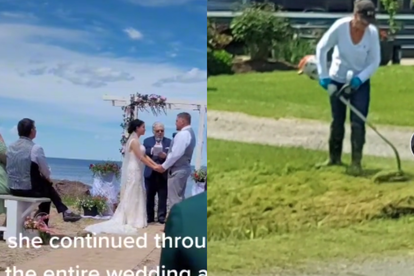 This woman insisted on cutting her grass with her lawn mower during her neighbours wedding. Images via TikTok:

This woman insisted on cutting her grass with her lawn mower during her neighbours wedding. Images via TikTok:

Weddings usually leave people feeling all kinds of warm inside because of the loving message behind a couple deciding to solidify their union. One woman however was ice cold when her neighbours got married – so cold that she decided to mow her grass during their garden ceremony interrupting the entire thing with the noise that was generated from the grass-cutting machine.

A video of the entire thing was shared online resulting in the woman – who many are now calling a “Karen” – getting severely bashed by netizens.

Woman insists on mowing her law during neighbours garden wedding

For many couples, their wedding day is one of the most important days of their lives and they will do just about anything to make sure it’s the perfect day.

One couple was stripped of this opportunity after they decided on a backyard wedding but were rudely interrupted by their neighbour and her lawnmower.

According to TikTok user @Vampyyric, the neighbour decided to start mowing her lawn as soon as the song for the bride to walk down the aisle started.

“The second the bride’s song came on and she walked down the aisle, this Karen decided to purposely mow her lawn and yell at us to ruin the wedding,” wrote @Vampyyric.

She also added that the mowing continued throughout the wedding resulting in the couple’s vows being interrupted by the continuous noise.

After approaching the woman to get her to stop, she treated them very unkindly recounting the TikTok user.

“We went up to her no she was not kind, not everyone has a reason to be a c#nt some people are just rude like that. It’s truly unfortunate,” wrote Vampyyric.