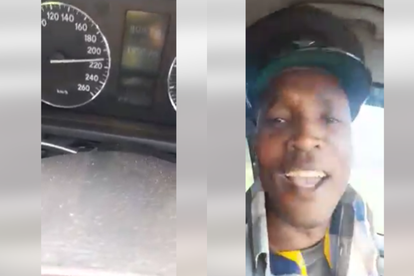 This driver and his passenger were excited to go over 200km/h. Images via Facebook: SA Long Distance Truckers

This driver and his passenger were excited to go over 200km/h. Images via Facebook: SA Long Distance Truckers

A local man and his friend have been called the “biggest fools” in the country after they recorded themselves driving at super high speeds. In the clip that has since made its way onto social media, the guy driving records his speedometer which shows the car reaching speeds of over 200km/h.

Many social media users have slammed the man for bragging about driving so dangerously. Others have called him a “mampara” for showing his face in the video.

SA not impressed with driver who recorded himself speeding

“Suicide mission on SA roads,” one social media user commented after watching a clip of a man recording himself while driving at high speeds on what appears to be a deserted road.

In the clip, the man records the speedometer of the Mercedes Benz car which shows that he is driving at speeds over 200kph.

His passenger seems overly excited by the dangerous drive and can be seen laughing with the driver who also appears to be quite chuffed with himself.

The short clip was shared on Facebook on 10 March by SA Long Distance Truckers and was captioned:

“This Einstein is recording himself driving at over 200kph”

The clip received a number of reactions from social media users who either said that the man was doing nothing wrong or slammed him for driving at that speed. Here are some of their comments:

“Treasure Matlala this guy is not only facing overspeeding charges, but he is also facing reckless and negligent driving as well, I remember this other guy made headlines for filming himself driving at 307kmph he was arrested and received with a plethora of charges.”

“Probably stolen vehicle he is driving, no one who has paid for a Mercedes would drive it like that. Mampara of the month.”

ALSO READ: Anything for clout? Man stages BMW purchase with fake keys and all