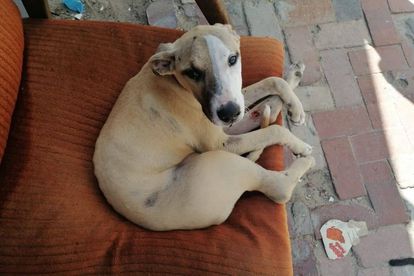 A badly injured dog who disappeared from her owner’s property after SPCA inspection, has been found and is now getting the care she needs.

On 13 January 2021, inspector Jeffery Mfini was left sick with worry when a badly injured dog (whose owner refused the Cape of Good Hope SPCA’s offer of veterinary assistance) suspiciously disappeared from her owner’s property by the time he returned with a police escort.

Following a social media post by the Cape of Good Hope SPCA and a reward of R5000 for information on the dog’s location, the relevant authorities at the South Africa Police Service (SAPS) were notified that the dog had “miraculously reappeared” and they called the SPCA.

“This after the owner had already been arrested for the obstruction of justice and was being held in custody,” writes organisers for the SPCA on Facebook in a new post.

Inspector Mfini immediately drove to the charge office to get a police escort and returned to the property situated in Wallacedene (an informal housing settlement on the eastern outskirts of Cape Town) where he found and confiscated the dog who has since been named Bali.

“Because the SPCA does not have a veterinarian on duty after hours, Bali was admitted to the closest private veterinary facility so that her pain could be managed overnight”.

She has now been transferred to their on-site animal hospital where she is under the expert care of head veterinarian Dr Este Spies.

“We’ve called her Bali. Her name means strength or mighty warrior, attributes she will need to overcome the horrific neglect she has suffered. Bali has several old and new abrasions, including one that has left the cartilage on one hind leg exposed.”

It is said that one of Bali’s legs is badly broken and will require surgical repair, something that has to be delayed because Bali is also fighting Ehrlichia, a tick borne disease that affects the clotting capacity of her blood.

“Dr Este has already started treating this disease and will keep monitoring Bali’s recovery in the hopes that she recovers sufficiently and quickly enough to undergo the surgery needed to save her leg. Right now all Bali has to do is be is very brave, we will take care of all her other needs and do everything in our power to get her back on all four furry paws.”

Facebook users are extremely grateful for the SPCA’s efforts in rescuing Bali.

“Thank you, thank you, thank you for going so far beyond your daily duty to rescue and bring comfort and hope to badly abused and damaged animals. You truly are my heroes and I salute you for your love and commitment and for ensuring justice is done where necessary.”

“Thank goodness she has been removed and taken to a place of safety and getting the help she so deserves.”