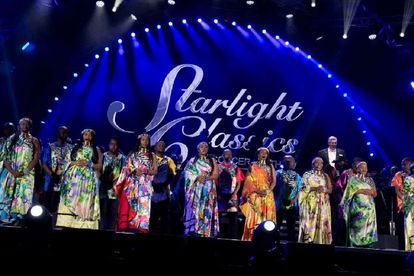 When the Soweto Gospel Choir was named as winner of the Grammy for Best World Music Album, it earned the ensemble a place in the music history books.

Announced by Questlove, drummer from the US hip hop band The Roots, the award sparked an explosion of excitement among the South African singers.

“He was almost stuttering, like: ‘And the winner is Fr- Fr- Freedom, Sss- Soweto Gospel Choir,’ then we jumped up! Like he took long, man,” chuckled choirmaster Shimmy Jiyane.

“I screamed my lungs out,” admits choir member Mary Mulovhedzi.

“Then the ululating came, the Sowetans (in us) just came out — we couldn’t hold back.”

What earned them the award was their album “Freedom” — a 12-track tribute to Nelson Mandela released to mark the 100th year of his birth.

It was the choir’s third Grammy in its 17-year existence, adding to accolades which include an Emmy and a debut album called “Voices From Heaven” which reached No. 1 on Billboard’s World Music Chart.

“Freedom” gives a modern twist to so-called struggle songs — campaigning music rooted in South Africa’s apartheid past, when the black majority were subjugated by the white minority.

“It’s a story in a way of what happened during those days,” bass singer Mulalo Mulovhedzi told AFP.

The album draws inspiration “from the freedom fighters of 1976,” he said, referring to a linchpin year in the fight against apartheid — the Soweto uprising.

“The whole idea (was) that we have to go back to Soweto, where freedom started.”

‘Food for the soul’

Soweto – a shortened form referring to the South West Townships on the edge of Johannesburg – became a worldwide symbol of resistance.

And it is where the group has been based since it was founded in 2002.

Much of the choir’s captivating sound is composed and arranged in indigenous South African languages including Zulu, Xhosa and even Afrikaans.

Yet some of their biggest audiences are in Europe and America.

“When we sing, it’s as if people understand us, so that’s music — it’s universal and it’s spiritual and has the power to restore,” explains musical director Diniloxolo Ndlakuse, dressed in bright traditional costume.

“When we do ‘Jikijela ngamatje’, when we cry and show emotions, the audience is crying,” Jiyane says.

“You must remember that music is food for the soul.

“It heals you, even if you don’t understand what I say… you get to be there with me.”

The ensemble, which counts 52 members, has graced prestigious foreign venues including Carnegie Hall, the Sydney Opera House and the Royal Festival Hall in London.

Back in Johannesburg, the rhythmic sound of feet and hands tapping in unison fills the hall where the choir members practise their routines.

Two rows of about 20 men and women between the ages of 24 and 50 harmonise backed by a djembe, a skin-covered drum.

Because of its surging popularity, the group has split into three identical units to meet the insatiable global demand for its performances.

“Some of our singers are not musically trained. So what we do is we learn by ear,” Jiyane says.

“That’s the rawness of it and that’s the simplicity.”

The brightly-dressed singers have collaborated with several international acts including Celine Dion and Chance The Rapper, and also worked with Peter Gabriel on the song “Down To Earth” from the 2008 sci-fi blockbuster “Wall-E”.

The track went on to win a Grammy in the Best Movie Song category.

Mulovhedzi, whose late father David co-founded the group, says the group’s sound has evolved “because of the experience… of the collaborations with other artists”.

But choirmaster Jiyane insists their signature sounds are “simple” and unchanged.