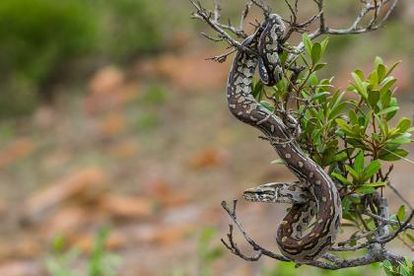 Through the help of a good Samaritan, a group of friends successfully managed to save a Southern African Python that was stuck in an electric fence in Umhlali, KwaDukuza on Saturday, 19 February.

Durban snake catcher, Nick Evans said he received a call from the friends who all sounded distressed.

The snake catcher said he wasn’t happy to hear about this either, as he had seen two pythons die in an electric fence before.

The python was apparently getting weaker as the group made calls to try and turn off the electric fence.

“I was not far away, actually doing research on the same species. I was getting ready to leave when they said that a farmer had arrived to sort it out. And, the good news, was the fence was cut off! The farmer kindly cut the wire, and freed the snake,” Evans said.

The Southern African Python is a protected species. It is illegal to be traded or killed.

Evans said it is sad that South Africa loses so many of these species to people who kill them to sell for muthi. Habitat destruction is another issue, among others.

“So for this beautiful, big specimen to be saved, was so important. Hopefully it lives a good life, and has learnt to avoid electric fences!

“For me, it was so encouraging to see that this group cared so much. I see a lot of cruelty towards snakes everyday. Seeing people go out of their way like this, with such determination, was just brilliant.”

ALSO READ: Flight diverted after passengers spot a SNAKE on the plane