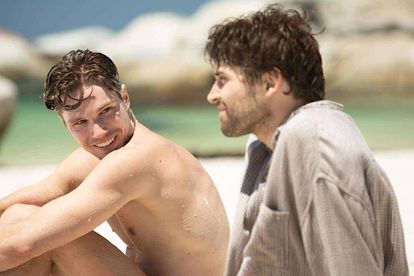 At the Venice Film Festival it was nominated for the Queer Lion Award and at the London Film Festival it is nominated in the Best Film category. It’s a standout film and, for many, a revelation. At the press screening here in London, I heard many surprising (good) comments and murmurs of admiration.

Moffie is a study of closeted homosexuality in the apartheid-era South African army. Like all white boys his age, 18 year old Nicholas van de Swart (Kai Luke Brummer) is drafted into two years of compulsory military service. He falls for a fellow recruit (Ryan de Villiers)  on the Angolan war front in 1981. Nicholas may have an Afrikaans last name — a resented imposition, courtesy of his stepfather — but the fine-featured, well-spoken lad risks sticking out like a sore thumb. Each time the word ‘moffie’ is spoken, it burrows a little deeper under the skin.

“In fairness, I have never given much thought to the hardships of white South Africans. In my mind, informed by the hardships and struggles of my own parents and their parents before them, all white people in South Africa have had it easy.

“As a result I never considered young, gay, white youth living in the 80s, never saw them as enemies of the state. This is a film about such a youth. White, eighteen and coming to terms with his illegality.”

Anyone who grew up gay in pre-millennial South Africa or fought the “Communists and ‘Swart Gevaar’” may need to dig their nails into their armrest to get through what is both a vivid exploration of unspoken desire and a brilliant anatomy of white South African masculinity.

Based on the novel by Andre Carl van der Merwe, it is Hermanus’ fourth feature film after Shirley Adams, Skoonheid The Endless River.

Details of the screening of Moffie