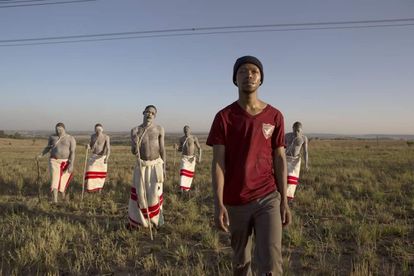 Already selected to be South Africa’s entry for the Foreign Language Award at the next Oscars, this week The Wound won the London Film Festival’s prestigious First Feature Film Award and next week, on October 27th, it will open FILM AFRICA, London’s biggest celebration of African and African diaspora cinema.

I caught up with director, John Trengove, between screenings at the London Film Festival. It’s a project he’s been working on for the past six years with novelist Thando Mgqolozano, whose novel A Man Who is Not a Man the film is based on.

“The Wound was born out of a desire to push back against clichéd stereotypes of black masculinity perpetuated inside and outside African cinema,” the UCT and New York film school-trained Trengove, 39, told me.

“Most of the men who worked on the film were non-actors and initiated and the musician Nakhane Toure was cast to play the guide to Kwanda, a city boy from Johannesburg, sent by his father to be toughened up  through this rite of passage into manhood.”

They shot in Atteridgeville at the Cradle of Humankind, not the traditional Eastern Cape Mountains, where Xhosa boy initiates (amaqueta) continuously mark the transition from boyhood to manhood with an initiation ceremony followed by a time of isolation.

Twice a year, groups of initiates in their late adolescence leave their communities to live in secluded camps where they are ritually circumcised and mentored by young men from their communities. Increasingly, the practice faces mounting criticism for reasons of safety and relevance, although it remains a cornerstone of traditional Xhosa culture and is considered a defining event of a man’s life.

While Xhosa men are forbidden to speak openly of their experience of Ukwaluka, Nelson Mandela famously broke the secrecy taboo by describing his initiation in his autobiography, Long Walk To Freedom.

The film is made on an internationally-raised budget of R11mil. It premiered at the Sundance and Berlin Film Festivals where the reaction was striking and controversial, and its awards are building up.

“Next month I go to Los Angeles to campaign for the film and canvas the Oscar voters,” says Trengove. “This film has been the most rewarding and difficult thing I’ve ever done and its acceptance has been a massive high for all of us.”

The Wound is released in cinemas in the UK and South Africa in February.