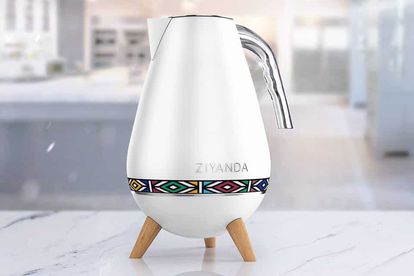 Zonke Zama Ndaba’s unique designs – consisting of a toaster, kettle and stand mixer – was born from his desire to “preserve African culture.” He said in an official statement:

“I really appreciate the support as a young black man in South Africa trying to preserve the African culture. Ziyanda Appliances was born out of the need to add to many brands that showcase the fact that South Africans can also create beautiful high-end luxury products.”

Ndaba received mixed reviews on social media. Several netizens had an issue with the cost of his appliances, but Ndaba has many people in his corner promoting his unique work.

LIMITED EDITION __________ The limited edition collection is an expression of African art, the colourful pattern is inspired by the indigenous ethnic Nguni tribe native to South Africa called ama’Ndebele. Only 200 of each products produced.

A Twitter user known only as The Villager said that people whose first reactions are to complain about the price are the same people who keep moaning that South Africans don’t support black businesses.

Mandla Mpanza said on Facebook that the prices are fair and competitive, comparing Ziyanda appliances to other well-known brands like SMEG. He added:

“Stop complaining about price cause you support foreign companies with ten times the cost. I will be placing orders myself at that advertised price.”

Another user, Anita Morokolo, succinctly summed it up by saying that “this is a black entrepreneur trying to build a brand for themselves,” and added that the naysayers were the reason many entrepreneurs become despondent. She concluded:

“Stick with your Phillips and reserve your comment while typing using a 21K Apple iPhone.”

Questions also arose about the ownership of the company, with many assuming industry expert Rafael Pinto Maia to be the owner.

Ndaba mentioned in the statement that he sketched the initial designs before sending it to Maia “with the hope that he would add his industry expertise as an industrial designer.” He added:

“I gave Rafael the authorisation to put the work on Behance this adds to his profile and attracts business for him. ZIYANDA is 100% black-owned with 30% of female equity.”

All my Ziyanda appliances gonna live in the room divider ! You wanna make tea or toast, you’re gonna have to wait till I get back from work with the key. You can look, but don’t touch !