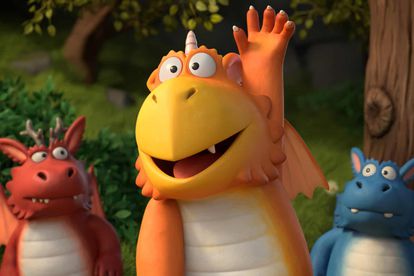 The movie features the voice talent of Kit Harington of Game of Thrones fame as Sir Gadabout, as well as comedy heavyweights Lenny Henry as the narrator, and Tracey Ullman as Madame Dragon.

Friday 8 March marks the opening of the Cape Town International Animation Festival (CTIAF). To mark the occasion, Animation SA will be hosting the African premiere of the BBC Christmas special. The screening will take place at The River Club in Observatory.

The movie is based on the award-winning picture book written by Julia Donaldson and Axel Scheffler. The book has sold over 1.5m copies to date and tells the story of a dragon coping with some problems at Dragon School.

What Zog lacks in skill, he more than makes up for with enthusiasm as he tries his best for a gold star from his teacher. South African co-director of the feature, Daniel Snaddon who also happens to be the co-founder of CTIAF, has this to say about the lovable but clumsy dragon:

“He’s super enthusiastic, and he loves what he’s doing; he’s just not very good at it. I think a lot of us feel like that. Hopefully not all the time but certainly there are times when you know you’re falling short of your aspirations.”

As for the festival, it has gone from strength to strength from being a one-day niche event to a fully fledged festival featuring local and international stars of the animation industry. Snaddon explains that it was “amazing to watch it grow and be accepted by international community. He added:

“This year, they have Peter Ramsey, director of Spider-Man: Into the Spider-Verse – just after he won the Oscar! And Aron Warner, who produced Shrek and The Book Of Life […] I’m proud of the small role I played, but festival director Dianne Makings really deserves all the credit – what she’s done with the festival is remarkable.”

It has to be said that the animated feature received nearly the same amount of views than the Queen of England’s Christmas broadcast, lagging behind only with about 200 000 viewers.

Most importantly, Zog will make your daughter want to be a doctor, not a princess. Snaddon says that Zog is a progressive story “about two people who are told by society that this is the way you do things.”

They rebel against the notion with the mindset of, “No, we’re going to make up our own minds.” Even though Snaddon is delighted that Zog is being “hailed as a feminist story,” he feels that it’s setting the bar “awfully low.” Snaddon explains:

“I do think it’s an awfully low bar if all we’re advocating is that women can be doctors. Maybe it’s because we’re saying that being a doctor is more aspirational than being a princess. That’s cool. My father-in-law is a doctor and my sister-in-law is studying to be a doctor – it’s a very worthwhile, noble pursuit.”

And more of the adorable Zog: