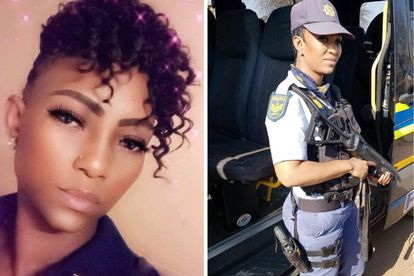 WHO IS THE MYSTERIOUS POLICE OFFICER?

The policewoman – who uses the Twitter @bassiemhl1 – refers to herself as “Bubbles”. Her Twitter bio reads: “Spontaneous Scorpio”

According to several posts, the woman is a 42-year-old member of the SAPS Flying Squad department.

In recent days pictures of the woman have gone viral on Twitter. This, after she revealed one of her wearing her full police uniform.

But despite wearing and dreary uniform, the woman showed off her glam side too, with a full face of make-up, eyelash extensions, and diamond earrings.

She tweeted in the caption: “So people have been asking what I do. Well this is what I do”

It wasn’t long before male tweeps were doing virtual somersaults to get the police officer’s attention.

And that included vows to break the law too!

Here’s what tweeps had to say about police officer bae:

@ekeoneman: “Arrest me, officer, you are beautiful”

@BlackJugde: “You should be in the Flying Squad, damn you’re so damn fly”

@ReherbJoy: “I don’t know if it’s you, the uniform, or the gun but I’m literally turned on”

@Jumak_SA: “I would like to report myself, I committed a crime”

@LindileMafanya: “Let’s go play a shooting game in my bedroom, with no protection! Puns intended”

Also a body search to make sure I have no concealed weapon on me pic.twitter.com/Vgw8FVTb4g

I don't know if it's you, the uniform or the gun but I'm literally turned on pic.twitter.com/pErTt2RIqZ