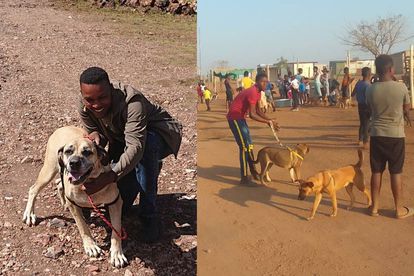 Tebogo Maredi, a dog-lover in Soshanguve has uplifted the community with his animal shelter. Image via Facebook: Tebogo Maredi

Tebogo Maredi, a dog-lover in Soshanguve has uplifted the community with his animal shelter. Image via Facebook: Tebogo Maredi

Tebogo Maredi, a man based in Soshanguve, Pretoria, has brought animal lovers in the township together. As per You, Maredi is addressing animal cruelty in the township through his non-profit organisation, the Soshanguve Animal Shelter. He has also gotten the youth involved to walk dogs once a week.

TEBOGO MAREDI OPENS HIS HEART TO DOGS IN SOSHANGUVE

In 2018, Tebogo Maredi lost his job as an operations manager and moved to Soshanguve, Pretoria with his dog, Ellie. Whenever the 32-year-old walked his dog, he would see that other dogs in the area were living in poor living conditions.

“I would come across animals that were skinny and neglected. Some were tied to trees. I just figured I should help them,” he told You.

Maredi then started the Soshanguve Animal Shelter and Educentre and began by feeding and washing five dogs in the community. His non-profit organisation has since taken off and he now caters for more than 200 dogs.

GETTING THE YOUTH INVOLVED

Eventually, Maredi wanted to educate children about the dogs and started inviting them on regular walks. Approximately 90 children between 6 and 16 years old take the dogs on two kilometre walks.

“I could have just given the children dog food and collars, but I wanted to educate them. I wanted to help children understand these animals also have feelings,” said Maredi.

The Soshanguve Animal Shelter and Educentre runs through donations from the Society for the Prevention of Cruelty to Animals (SPCA) and other local dog lovers.

DOGS LIVING IN THE TOWNSHIP

“Especially when people do not have access to primary health care services and their pet is not immunised against cat flu/ parvovirus/distemper,” said Levinson.

She added that dogs in the township live different lives to animals in the suburbs and are usually used to protect the family home.