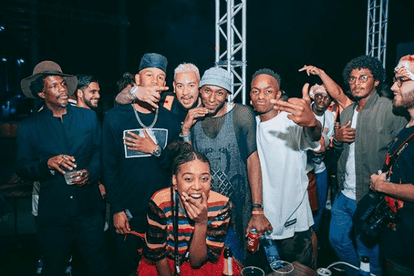 South Africa was well presented out in Dubai this past weekend, as AKA, YoungstaCPT and Sho Madjozi were on stage at the #SoleDXB Festival.

The three musicians have been doing a lot of international touring lately. YoungstaCPT, no stranger to foreign stages, was on the cards next to the likes of Nas, Giggs and Masego.

AKA was also listed as a performer at the event. However, for the Mega, who must be on a hiatus after the success of his recent platinum-selling album, Touch My Blood, it was nothing but good vibes.

#SoleDXB Festival: What’s it all about?

Sole DXB Festival is an annual lifestyle and music event. It occurs around time time every year and always lends its musical tastes from different artists from all corners of the world.

This year was no different. Except, South Africa’s greatest talent was on the cards.

Sho Madjozi is possibly the one artist whose rise to fame has come faster than anyone ever anticipated. The lady of dance was all smiles, as happy as ever, with her mates.

A week after the release of the ever-controversial list of #HottestMCs, the Mega and YoungstaCPT did not look phased about how under appreciated they are by industry journalists in South Africa.

YoungstaCPT, the recipient of 2017’s Lyricist of the Year award at the South African Hip-Hop Award (SAHHA) did not even feature in that list.

It is as clear as day now that talent is never a criteria in these lists but rather a popularity contest based on how many people in the panel you know on a personal level.

He was pictured as happy as ever with Mega and co., a clear indication of possible work between the two artists in the nearest future.