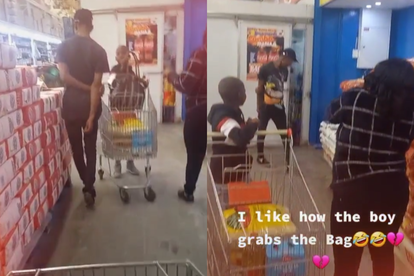 A young boy has been lauded online after a clip of him protecting his mother’s handbag from a suspicious looking person. In the video which has gone viral on various social media platforms over the last few days, the quick thinking pre-teen spots the young man walking his way and then quickly moves the bag out of harm’s way.

The clip impressed many people who are aware just how much theft is on the rise in South African shopping malls and stores.

For the last few years, there have been a number of alarming theft incidents that happen while unsuspecting customers are doing their shopping.

Sneaky thieves appear to be taking advantage of the fact that most shoppers are so distracted that they don’t notice when people are taking things such as purses and cellphones out of their handbags.

A young boy who undoubtedly knows about the scheme, decided that his mother would not become the latest victim and so he took swift action.

In the TikTok clip shared by @enthiny1, the kid and is mom are shopping when a @enthiny1 is pretending to be a suspicious man approaches their trolley which the kid was pushing.

After looking closely at the character, the boy decided to quickly move the bag to make sure any problems are avoided.

“They thought I was a thief. I like how the boy grabs the bag”

The clip left many impressed with how alert the boy was. Many of them lauded him in the comment section:

“Boy did a risk assessment and took appropriate action .”

“He was protecting his pocket money .”