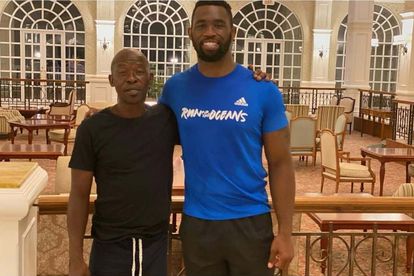 Springbok captain Siya Kolisi said he wanted to heal and strengthen his relationship with his father in an emotional post he shared with his 570,000 Instagram followers.

SIYA KOLISI TALKS HEALING HIS RELATIONSHIP WITH HIS FATHER

Siya Kolisi posted a picture of him and his father, Fazakele Kolisi, at The Boardwalk in his home city of Port Elizabeth on 11 February, just days before news broke at the weekend that he and the Western Province Rugby Union were going their separate ways.

In the lengthy caption he said he could now sleep lighter after having had a heart to heart with his father.

“I slept with a light heart phezolo because I had a much-needed deep conversation with my father,” Siya Kolisi said.

He added that, over time, he had developed the courage needed to work towards the process of healing.

“I’m not sure about the relationship between time and healing, but I now know that in time we can grow the courage we need in order to take the first steps towards healing.”

He said the relationship between him and his father was important to him and he would fight for it.

The Springbok captain hails Zwide township in Port Elizabeth and was raised by his paternal grandmother. His parents had him at a young age — his mother was 16 and his father was in matric.

Siya Kolisi previously did not have much of a relationship with his father and has spoken about the tough times he experienced as a child. However, he made sure his father was present to watch him lead the Springboks to victory in the 2019 Rugby World Cup.

As he seeks to heal his relationship with his own father, he remains an amazing father to his own children, Nicholas and Keziah.

While in Port Elizabeth, the Kolisi family have been enjoying some down time. Siya’s wife, Rachel Kolisi, posted a cute video on Instagram of the couple’s three-year-old daughter, Keziah. The little girl was dancing down the street with her father encouraging her from the sidelines.

Keziah is dressed in a pink tutu with a Grey Nike T-shirt and black boots. While she dances, a fan in the background calls out her name. She turns around and does a little wave.

In the caption Rachel said: