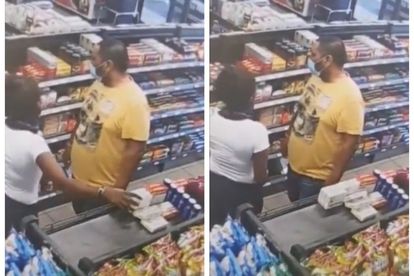 A Durban couple who were caught on CCTV while shoplifting, are on the run from the police. Image via Twitter @SuthentiraG

A Durban couple who were caught on CCTV while shoplifting, are on the run from the police. Image via Twitter @SuthentiraG

A Durban couple is on the “wanted list” for allegedly stealing from several service stations in the city.

A video of the couple cleaning out a shelf at a store on 10 July was shared on social media and according to TimesLIVE, this was one of many shoplifting incidents.

CCTV footage sourced from one of the stores shows the couple, who have hidden half their faces with masks, performing their usual shoplifting activity.

The woman can be seen stocking up on what appears to be medication, including Med-Lemon. As she puts the items inside her pants, the man pretends to be looking at other items on the opposite shelf. The woman does not stop until she’s emptied the contents of one of the shelves into her pants.

People are asked to be on the lookout for the shoplifting couple who have previously been spotted driving a black Opel Corsa.

According to police spokesperson Lieutenant-Colonel Nqobile Gwala, a case of theft has been opened against the pair.

“It is alleged by the complainant that on 10 July 2022 at 16:05, he noticed a certain shelf at his workplace was empty. He went to view the CCTV footage and saw a male and a female stealing goods from the shelf.

“A case of theft was opened at Wentworth SAPS and the matter is still under investigation,” said Gwala.