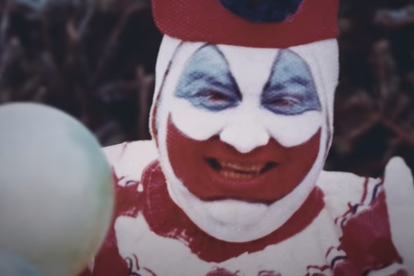 Clowning can be deadly. Get a glimpse into the life of the notorious clown serial killer John Wayne Gacy. Image: Netflix

Clowning can be deadly. Get a glimpse into the life of the notorious clown serial killer John Wayne Gacy. Image: Netflix

A clown and murder don’t usually go together unless you’re a Stephen King fan. Then you’ll know all about the crazy and gruesome things a clown can get up to. But, just like King’s IT, John Wayne Gacy had a taste for blood and murdered at least 30 young boys and men during his reign of terror.

In a brand new Netflix docuseries Conversations with a Killer: The John Wayne Gacy Tapes, viewers will get a glimpse into the life of the most feared clown in the world. He is infamously known for stating that clowns “can get away with anything. Clowns can get away with murder,” as per 2OceansVibeNews.

Although it might seem highly unlikely, the idea of a clown with an appetite for murder is not completely based on fiction.

Dubbed the “The Killer Clown”, Gacy regularly painted a smile on his face and donned his clown suit to perform as “Pogo the Clown” or “Patches the Clown” at children’s hospitals and charity events.

THE MAN BEHIND THE SMILE

Collider reports that the Netflix series follows the downfall of one of America’s most infamous serial killers, operating during the 1970s.

During his killing spree, the closeted gay Gacy targeted vulnerable teenage boys, often from poorer households. These boys often slipped past police’s notice when they went missing as can be seen in the documentary.

What is more frightening is that the killer was well known in his community and liked to play cat and mouse with the police. Gacy killed over thirty victims, often hiding the bodies in his own home.

Conversations with a Killer: The John Wayne Gacy Tapes features police footage, interview conversations Gacy had with his defence team and police and interviews with role players close to the case.

The latest in the Netflix three-part docuseries hopes to follow the success of Conversations with a Killer: The Ted Bundy Tapes.

Conversations with a Killer: The John Wayne Gacy Tapes releases on Netflix on 20 April.

Watch the trailer of ‘Conversations with a Killer: The John Wayne Gacy Tapes’