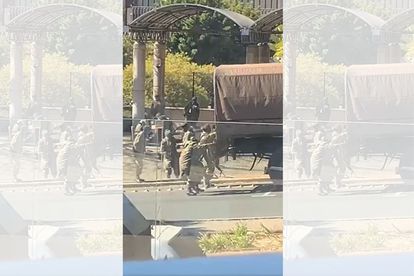 A video of a South African National Defence Force (SANDF) soldier has quickly gone viral in South Africa as the soldier seemingly struggles to get into a truck.

SANDF soldier struggles to get into truck

In the video, uploaded by Twitter user Greg Davies on 27 July, other soldiers appear to offer assistance in order to get their colleague up and onto the truck. After a while, they seem to give up the task. The ordeal has left many South Africans asking what happened to the fitness tests that must be conducted to be a soldier.

“I guess physical fitness is no longer a job requirement for the army,” said a social media user by the name, Giles. “Sigh…looks like an eating force,” said MatserYak. Meanwhile, others claimed it was harsh to judge the entire military from a clip of one soldier. Twitter user Darren Olivier, for example, gave context to the video and said the SANDF is deploying everyone to meet the 25 000 troops needed to patrol the streets after the brazen looting that took place weeks ago, according to 702 Radio.

SANDF going off the rails

The video has since been watched more than 30 000 times on Twitter alone and recalled some funny SANDF instances among South Africans. One such instance took place in February 2020, when a training video of the SANDF went viral. The video, shared by 2OceansVibe, shows a SANDF tank driver going off the rails.

At the time, the SANDF responded with a statement saying that it had “noted with concern” the video clip on social media platforms depicting an SA Army Rooikat Light Armoured vehicle involved in an uncontrolled swerving towards spectators in SANDF uniform.

“There were neither injuries suffered nor damages reported. The SANDF can confirm that the incident happened during a practice run for the Armed Forces Day 2020 Capability Demonstration at the Roodewal Bombing Range. The Range is a controlled area that is utilised by SANDF personnel and equipment.

“It is regrettable that there are individuals who hide behind pseudonyms whilst intentionally portraying the SANDF negatively by posting and or commenting adversely against it.”