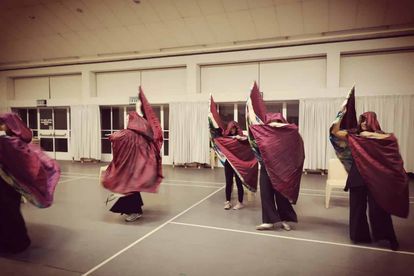 Dancers practice for belly dance show at the Artscape / Supplied

Dancers practice for belly dance show at the Artscape / Supplied

The belly dance performers will finally be able to perform at the renowned at Artscape Theatre in July this year.

After more than two years of waiting for their chance, dancers from the Sanaa-Moon Belly Dance Studio will grace the Artscape stage.

The Communications Manager for the Artscape, Simone Heradien, explained that the Once upon a dance night show was welcomed by the Artscape as part of its mission to allow previously marginalised art forms onto their stage.

The show will take place on 26 and 27 July. The proceeds of the show will go to the Scarlett Paws Animal Welfare.

“It is a large cast including actors and dancers. The dance styles include belly dance and hip hop styles.”

There will also be a theatrical element with Inger Jansen who has become known for her Poppie Der Sleutel character.

Once upon a dance night

The story, written by James, will seem almost like a Brothers Grim fairytale. But she assures the audience that there are twists and turns that will keep the audience entertained.

“It is a tale of the Crystal Queen and her Step-Mother supreme. But there is a cruel twist of fate, evolving a curse by the lake. But the fairies have a plan to save the land, it requires a special merry dance band.”

There are a variety of characters that will amuse and shock the audience.

“It is a Theatrical show that is set in a Fairytale story. A narrator will guide the audience through the story set in a magical land, character actors will meet dancers along the way, and the dancers will express the scenes through dances.”

James who has spent years performing as a belly dancer explained that she always tries to make her shows different from a typical belly dance show.

“Every show we pick a theme and mould the show around it. I and Tammy (my dance teacher assistant) were discussing what would be a fun way to tell a dance story that could include actors and dancers.”