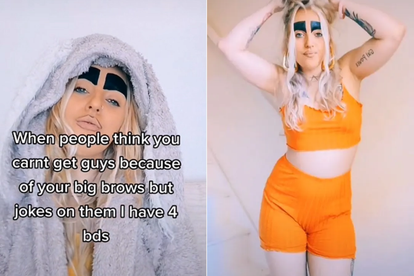 A young mother of four has managed to go viral on social media app TikTok for having what she believes are the biggest eyebrows in Britain. Sammy Jo has over 83 000 followers on the app and recently slammed those who have judged her for her overly large drawn eyebrows.

She says that she has no trouble finding a man and in fact has four different “baby daddies”.

27-year-old Sammy Jo has been making waves on TikTok with her bizarre videos and even more bizarre eyebrows.

The young mom has gotten the attention of thousands of social media users who have both mocked her and allegedly threatened to have Child Protection Services (CPS) called on her.

In one of her most viewed TikToks, Sammy Jo addresses assumptions that men find her unattractive because of her huge brows.

“When people think you can’t get guys because of your big brows – but jokes on them I have four baby daddies,” her video was captioned.

According to Sammy in the video, she has had no trouble finding partners and even has four “baby daddies” to prove it. She also says that she gets messaged all the time by men who express how much they would like to date her.

The Sun reports that Sammy Jo first started drawing her huge brows because she wanted to stand out from the crowd. According to her, they started off average-sized but then she started making them thicker because of the attention they were getting her.

It hasn’t always been good attention though after a few people allegedly threatened to call the CPS on her. Here’s what she has to say:

“They can call social services because I have nothing to hide.

“My eyebrows don’t determine whether I’m a good mother or not.”

“I just like to make a statement and the brows do that for me.

“They started off normal size and they just got bigger over time and I just like to look different.

“It would be cool if they were Britain’s biggest eyebrows.”